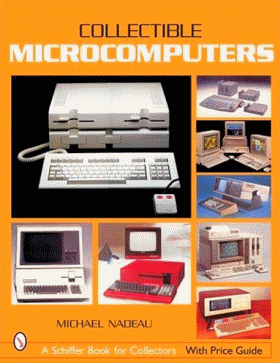 The history of early microcomputers is a poorly documented subject and the amount of misinformation available is incredible. That’s why it is such a pleasure to read a book by someone knowledgeable about the subject. Collectible Microcomputers is just that book, a reference book for classic computers.

It is obvious that an enormous amount of research has gone into this book. After a short introduction and a chapter covering collecting tips, the bulk of the book is devoted to a section titled “Microcomputers A to Z.” That section lists computer companies in alphabetical order with an entry for each computer manufactured by the company. Details are given for over 700 computers including:

There are even pictures of most of the computers. Unlike some other lists I have seen of computer values, the prices given here seem quite reasonable.

Not surprisingly, the most popular and famous microcomputer companies, such as Apple, Commodore, and Radio Shack, have the largest sections. But equally impressive are the sections for lesser known companies such as Ohio Scientific Instruments, GRiD Systems, Gavilan Computer, or Exidy Systems.

The Radio Shack section is eight pages long and covers a complete array of models. The descriptive text is informative and seventeen pictures help to illustrate the different models. Anyone interested in the TRS-80 should also look at the entries for LNW Research, Lobo Systems, EACA International, and BT Enterprises.

If you are interested in collecting old computers or if you would just like to learn more about computer history, then Collectible Microcomputers is a good book for you.