After writing his games for the TRS-80, Bill Hogue went on to even greater fame as the author of Miner 2049er, the 1984 Electronic Game of the Year, and its sequel, Bounty Bob Strikes Back! More recently, he created the official site of Big Five Software. I was pleased to have the opportunity in October 2008 to interview Bill Hogue. See the interview below. 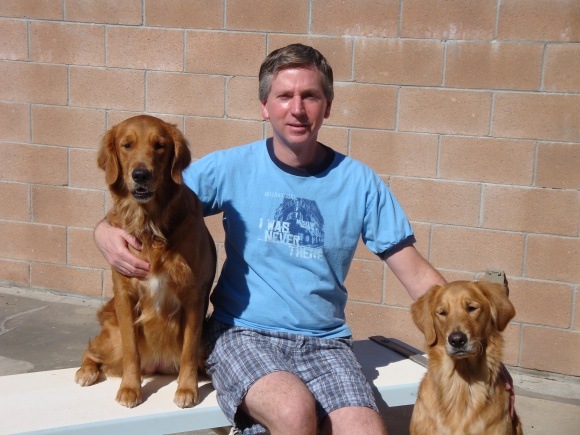 Q: How did you get started with computers?

A: I first played with a TRS-80 in high school. Sometime after that I ended up working at local Radio Shack in Reseda, California. Between customers I would try my hand at writing programs in BASIC and later in assembly language.

Q: Where did you get ideas for your games?

A: Jeff Konyu and I used to play video games at local arcades. There was a real cool one in Westwood. We also used to take trips out to a miniature golf center in Riverside which had a large arcade. They always had the latest games. So of course our games were patterned after the stand-up arcade games that we were pumping quarters into.

Q: How long did it take you to write a game?

A: I’m not sure I remember the mechanics of it! It was a long time ago!

Q: Which of your TRS-80 games was your favorite? 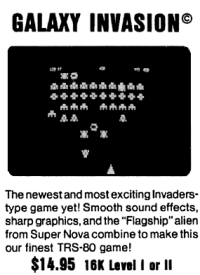 A: Probably “Galaxy Invasion.” The animation of how all of the aliens moved around on the screen on the attract mode screen is something I remember watching in my dark bedroom at night.

Q: Why do you think your TRS-80 games are so well remembered (and well liked) today?

A: We were just kids having fun when we were playing the games in the arcades and in the local pizza joints. And since there wasn’t an endless supply of quarters we started playing games at home where we could get real good at them. So I would guess there’s a lot of people who miss that simpler time before we all grew up and got real jobs.

A: When we moved to our office on Keswick Street in Van Nuys we had several programmers working on different projects. And that was actually one of them. Kelly Bakst had programmed a version of Miner for the TRS-80. I really don’t remember why we never released it, though.

Q: How did you get the idea to use your voice in a game?

A: Jeff and I went to a video game convention in New York city. I remember seeing a skiing game that had voice sound. I believe it may have been on a TRS-80 color computer. After seeing (and hearing) that game I began working to see how I could put voice effects into our games. In fact to this day I still own a vintage “Black Knight” pinball machine. I always loved that game because it was one of the first pinball machines to have voice effects.

Q: What development tools did you use to create your TRS-80 games?

A: Nothing fancy — I just used the standard Radio Shack editors and assemblers for Z-80 code. If I remember correctly the debugger was called “Z-Bug” or something like that. I remember being completely baffled as to how to use it when it arrived in the store I worked in after I hounded my manager to order it for me.

Q: How much of your TRS-80 programming experience were you able to apply to the Atari?

A: Well of course I had to learn all the new opcodes for the 6502 microprocessor. In many ways the Z-80 was the better CPU. But I guessed I found how to live without the LDIR instruction! But all of the techniques for manipulating little pixels on a TV screen were the same. It’s just that now I finally had color to play with.

Q: How did you come to develop the TRISSTICK?

A: I believe there was a company based in New York that approached us about modifying our games to work with a joystick they wanted to produce. [Editor’s note: The company was Alpha Products in Woodhaven, NY] We did modify our games but we later decided to get into the hardware business ourselves. Thus the trademark “TRISSTICK” was born!

Q: Early TRS-80 joysticks used four bits to represent UP, DOWN, LEFT, and RIGHT, and the FIRE button was represented by UP and DOWN at the same time. Later joysticks, such as the TRISSTICK, used a fifth bit to represent the FIRE button instead. Robot Attack needed that change to allow moving and firing in all four directions. Did you come up with that idea?

A: Wow — your knowledge of the low-level details of TRS-80 equipment is way better than my fading memory! But if that’s the way our joysticks worked then yes, it would have been me who soldered and built the first prototypes. I was always playing with electronics since I was a kid. Heathkit was like a toy store for me. I built kits from clocks to televisions.

Q: Were you ever able to just play and enjoy a game that you created without thinking about the logistics of what had gone into it? 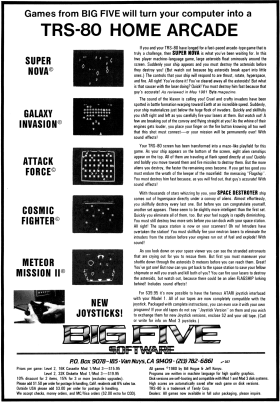 A: Oh sure. I didn’t have the code running though my head if I was playing a game. Although I’d probably have to admit there were plenty of games created by other people that while playing them I would be distracted with thoughts of “Gee, how did they do that?!”

Q: Did any of your games start out very different than they ended out?

A: We really knew what we were trying to achieve for the TRS-80 games when we got started so there weren’t too many major changes when they were complete. The only time I ended up having trouble was for the Scraper Caper game for the Atari. The first incarnation was a scrolling game where Bounty Bob was a firemen in a burning skyscraper. Then we scrapped it and did a totally different game where Bounty Bob was chasing little fireballs on a 3-D playfield. After that one didn’t live up to what we were looking for I decided to write Bounty Bob Strikes Back, which turned out to be my final game.

Q: Do you have positive memories of the TRS-80 era and is there anything about it that you miss?

A: Almost all of the memories are positive! I do miss the time when just two friends could collaborate and produce a game. Now everything is produced by teams of programmers and artists. Today’s games certainly look pretty and sound great but sometimes the simple, basic game play of the older games can be more fun and challenging.

Q: Are there any aspects of the TRS-80 that you wish could be applied to computers today? 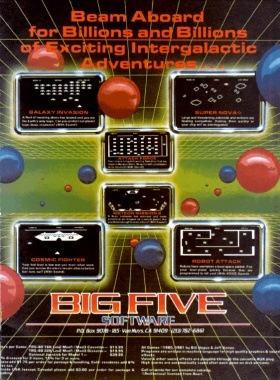 A: I can’t think of anything that was offered on a TRS-80 that hasn’t been done better, faster, and cheaper on computers of today. But I do still miss my LDIR instruction.

A: When we switched to doing Atari games I wrote a cross-assembler running on a TRS-80 Model 16. All of the editing and assembling was done on the 68000-based computer and then downloaded via serial port to the Atari for testing. Everything was stored on an 8" floppy disk. We even had several Model 16’s in use for accounting purposes. I haven’t encountered any TRS-80 computers since that time.

Q: What have you been doing since your days working with the TRS-80?

A: You can think of me whenever you go to your local movie theater. Since 1990 I’ve worked at Technicolor which is one of the two major companies that develops and prints motion picture film. So all of the coding I did in “real-time” games turned out to be good training for real-time, high-speed film printing equipment. Software I’ve written (mostly in C++ these days) runs on equipment in the US, Canada, Italy, London, Spain, Mexico, Japan, and Thailand. But if digital projection ever shuts down the film business I’ll send my resume over to Disney Imagineering in Glendale, California. Now that would be a cool place to work!

My thanks to Bill Hogue for his participation in this interview.

I just have to say, that Meteor Mission 2 still is my favourite arcade game. Even to this day, I’ll occassionally drag it out about four times a year and rescue some astronaughts, either with real hardware or in Matthew’s emulator.

I 2nd the notion that MM2 was my favorite as well. I enjoyed it so much that I wrote a flash version of the game. And as it turns out, I’m currently developing a version for the iPhone :)

Galaxy Invasion Plus! I eventually got to where I could play it “forever”, still play it once in a while under emulation.

The RS debugger he was thinking about was “T-BUG”. It was pretty simple, but it got the job done. The various RSM monitors from Small System Software eventually surpassed it.

It’s difficult to choose a favourite Big 5 game because they were so high quality. I too could play Galaxy Invasion forever, and of the Big 5 games, I probably spent the most number of hours playing that one.

An interesting piece of trivia; Big 5’s reputation has resulted in a few of these games (relatively recently) being ported to the Microbee, an Australian-designed computer from the 80’s. The porting involves programming the PCG with TRS-80 block characters, relocating references to video memory, and remapping keyboard and sound addresses.

I find the following statement on the BigFive webpage at

The version of Miner 2049er for the Atari home computers was the original version that spawned all the other licensed versions. We produced a version for Atari 5200 (running essentially the same code) and developed a version for the black and white TRS-80 computers but never released it.

Any chance a copy of that “black and white” version still exists? How would we get a copy if it does?

Big Five developed a TRS-80 version of Miner 2049er, but I don’t know that it was ever completed. Either way, the TRS-80 version is lost according to Bill Hogue.

Big Five Games were known for their artificial intelligence. They just seemed like smart games that thought for themselves. Attack Force was my favorite. Modeled on Exidy’s Targ, the game played better than the original.