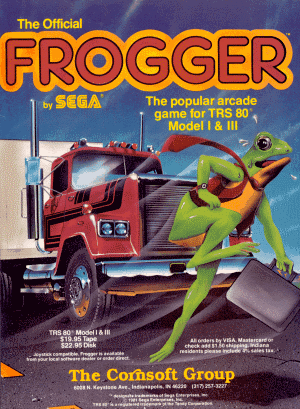 An advertisement from 80 Micro

Although there were many Frogger adaptations for the TRS-80, this Cornsoft Group version, written by Robert Pappas, was licensed by Sega and was the “official” Frogger.

The premise of Frogger is simple. The goal is to guide as many frogs as possible back to their homes, crossing a busy road and dangerous river in the process.

The TRS-80 version of Frogger offers a choice of five difficulty levels and an option to play background music. The famous theme music, taken from the Japanese children’s song “Inu No Omawarisan,” is the same used by the original arcade version. Most TRS-80 games played music during title screens and sound effects during the game, but Frogger was one of the few to also play background music during the game. This was not an easy feat on a computer with no sound controller. 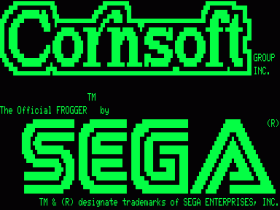 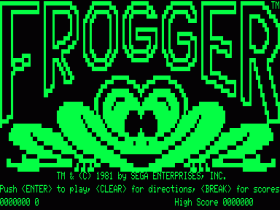 The first stage of the game involves crossing the road. Vehicles (which resemble cars, trucks, and tanks!) travel across the screen constantly, threatening to run over your frog. You need to cross the road by hopping from empty area to empty area, always keeping one step ahead of the vehicles. The vehicles travel at different speeds, so careful timing is very important.

The second river stage appears after your frog successfully crosses the road and reaches the median. The goal here is to cross the river and reach home at the top of the screen without landing in the water and drowning. Logs and turtles float down the river, and you travel by hopping from one log or turtle to another. 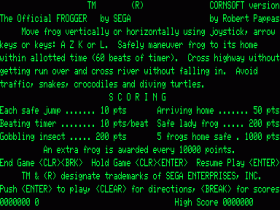 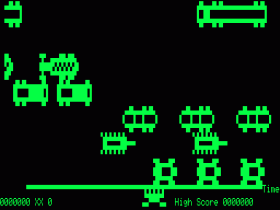 Complicating matters is the fact the the turtles sometimes dive into the water, drowning your frog if it is sitting on one at the time. Also floating down the river are crocodiles and snakes which will eat your frog if you make a wrong hop. On the plus side, there are bonus points for eating insects and saving a “lady frog.”

Frogger does a very good job of representing the arcade game within the limitations of the TRS-80 low-resolution graphics. My only complaint is that it is occasionally difficult to distinguish the crocodiles from the logs. Some other Frogger adaptations I have seen suffer from sluggish player controls, but this version has a very snappy keyboard response.

One problem common to computer adaptations of Frogger resulted from the fact that the Frogger arcade game used a screen that was higher than it was wide. The very tall playing field meant that both the road and river stages could be visible at all times. Computer screens were not that tall and this often meant that the road and river were compressed to fit together on the screen.

The TRS-80 version took the novel approach of splitting the playing field into two stages. Only after completing the road stage does the river stage scroll into view. I happen to think that this works better because the two stages are completely separate. 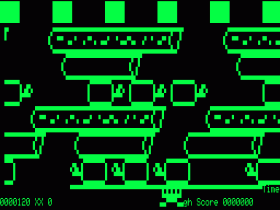 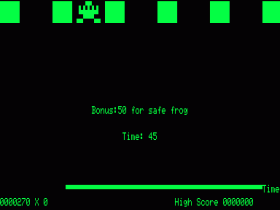 The Cornsoft Group sold Frogger until the end of the TRS-80 game market in 1983.

Hey! Thanks so much for posting this. I wrote this game when I was 16 years old. It’s totally done in Z-80 assembler. I also wrote Bounceoids and Crazy Painter for the Cornsoft Group.

I now work for Microsoft and was preparing for a high school career fair. I needed to find my old Frogger posters and boxes. Finding this website was easier!

Hey – thanks for the link, Robert! Fun to see what you wrote when you were half my current age! Congrats on making video game history Hall of Fame!!! So fun to have such an accomplished brother-in-law :-) Ribbit…ribbit…*splat*

Hello. Good old memories. I wish I could here the title sound of this game. I really can remember the music and sounds on a TRS80 compatible Video Genie I.

There’s an incredible amount of memories coming back indeed! Both this game and Crazy Painter were definetly among my favourites together with the Yves Lempereur and Big Five Software stuff.

Great to hear from Robert! All 3 of his Cornsoft TRS-80 games were top notch!

i remember being about 10 years old and scoring a copy of this for my TRS-80 model III. i remember vividly holding the plastic case for the game in the back seat of my mom’s car and feeling SO EXCITED about it. especially because it said i could get SOUND out of the CASSETTE PORT! so now my silent trs-80 could make sound…? wild!

also, i remember my sister hated it when she was trying to watch tv—because of the RF interference!!!

Hi Bob- I graduated in 87 from Cherry, married Tim Sauter. I work as a Para @ the Cherry School & one our English teacher, Tony Boggio, took over for Bob Haapala, & Mr. Choquette. In our Wednesday media class Mr. Boggio was showing a video on old gaming stations from Pong & Atari to Sega. We’ll there was a bit about Frogger, & Mr. Boggio told the class that Mr. Zupetz told him about you and how you created Frogger. We’ll of course the kids didn’t believe him until I spoke up & vouched for Tony. So I thought I would Facebook your sister Jennifer(I played bball with her) & she gave me a little insight on your career. And these websites. So we pulled them up & put them on the starboard, than the kiss believed us. If you could tell me how you ever started creating games on the computer? & what your hard work has done for you over the years? It would be great if I could tell the class " this former cherry student has done this, this & this with lots of hard work !!" We’re always looking at new ways to inspire, & give examples of former students who have made a name for themselves.