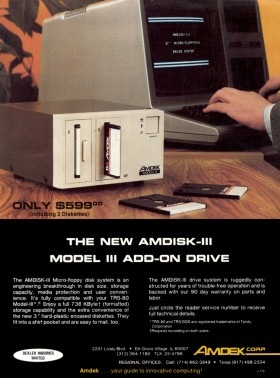 Amdek advertisement from the July 1983 issue of 80 Micro

The Amdisk-III was an external dual-3″ (not 3 1/2″) floppy disk system introduced by Amdek Corporation in 1982. The TRS-80 Model III version was originally priced at $899.00, but that price was soon reduced to $599.00 and later $499.00. Versions were also available for the TRS-80 Color Computer, the IBM PC, and the Atari 400/800. 80 Micro tested a prototype version for the Model I, but it is unclear if that Model I version was ever sold. Amdisk also sold a single-drive system, the Amdisk-I, that was only available for the Apple II.

The Amdisk-III followed the Hitachi 3″ microfloppy standard and its drives were capable of both double-density and double-sided operation. The drives themselves were plug-compatible with 5 1/4″ drives and the unit plugged directly into the external floppy drive connector on the Model III.

The Amdek advertisements promised a formatted capacity of 736K, or 368K per side. The Amdisk-III came with two 3″ disks. At the time, a box of ten 3″ disks cost around $55.00 on average.

Amdek continued advertising the Amdisk-III throughout 1983. However, in 1984 Apple chose the Sony 3 1/2″ drives for their Macintosh computer. The Sony format became the de facto microfloppy standard and the other formats, including the Hitachi 3″, were soon forgotten. But the 5 1/4″ disk format still had plenty of life left in it; it wasn’t until 1988 that 3 1/2″ drives finally outsold 5 1/4″ drives.

Hey — the 3″ disk had a long and happy life in the UK. The cheap and cheerful Amstrad word processor used ’em, and they sold lots of ’em. Also used on the Amstrad CPC, Sinclair Spectrum +3, Tatung Einstein (a somewhat rare but nicely-made CP/M machine) and the Orics.

Legend had it that Hitachi developed the 3″ disk so it would fit in a standard Japan Post envelope. 3½” ones don’t. 3″ disks were tough enough to send through the mail without an envelope: I did it a couple of times successfully, but I wouldn’t recommend it.