Articles in the "Graphics" Category 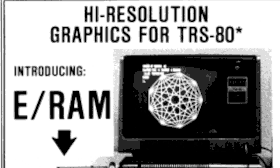 The E/RAM was a high-resolution add-on for the TRS-80 Model I. Introduced in 1980 for a price of $349.95, the E/RAM was designed and manufactured by Keyline Computer Products from Tulsa, Oklahoma. It was sold by Vern Street Products, also in Tulsa.

The E/RAM (an acronym for Extended Random Access Memory) contained 6K of video memory. It increased the TRS-80 graphics resolution to 256 by 192, with the high-resolution graphics overlaying the text screen. The graphics could be enabled and disabled using either software or a hardware switch.

The E/RAM came in a steel case measuring 2 1/2″ high, 6″ wide, and 12″ deep. The self-contained unit sat next to the Model I and installed in a straightforward way:

High-resolution graphics for the TRS-80 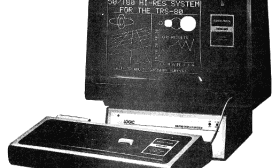 The SubLOGIC 50/T80 was a high-resolution add-on for the TRS-80 Model I. It was created by SubLOGIC, a company better known to TRS-80 users for their T80-FS1 Flight Simulator.

Here is the text of the 1980 product introduction:

The SubLOGIC 50/T80 system is a high performance professional graphics display system designed to be used directly with the TRS-80. It provides the high-resolution graphics capability which the 80 lacks—the kind of graphics needed for scientific, engineering, and educational applications. Dense drawings, graphs, and even alphanumerics can be put on the 50/T80’s 256 by 240 dot screen. The 50/T80 has the support of SubLOGIC’s 2D and 3D graphics packages, which are powerful and easy to use. They operate easily from BASIC as well as assembly language. 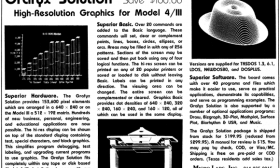 The Model 4 Grafyx Solution had many advantages compared to the Radio Shack board: 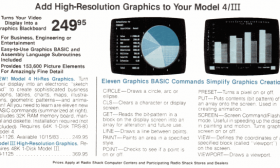 The Radio Shack Model 4 High-Resolution Board 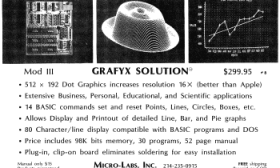 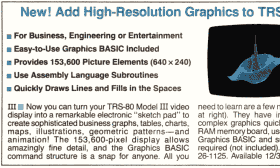 Radio Shack introduced their high-resolution add-on for the Model III (catalog number 26-1125) on December 30, 1982 for a price of $369.95. It was never identified by name in any Radio Shack catalog but the official name seems to have been “TRS-80 Computer Graphics Package.” Few ever used that name and it was commonly referred to as the “Radio Shack high-resolution board.” 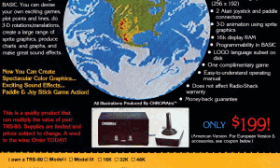 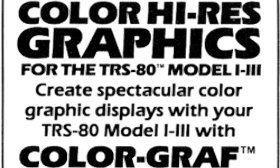