It is often stated that the Apple II dominated the computer market from its introduction in 1977 and that the TRS-80 and other competitors remained only minor players. Although often repeated, the numbers don’t bear out this assertion. Apple sold around six million Apple II’s between 1977 and 1993, but sales started slowly and built up over time.

Concrete figures for computer sales from that period are hard to come by, but Jeremy Reimer researched and compiled totals for his article about the subject: Personal Computer Market Share: 1975-2010. I prepared this graph representing his totals for 1977 to 1980: 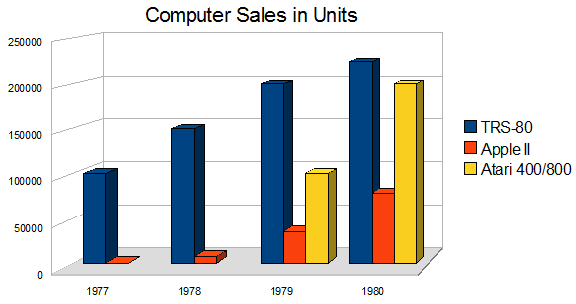 Starting in 1981, Apple II sales increased dramatically, helping to build what became their massive user base. In fact, Apple sold over 100,000 Apple IIe’s in December 1983 alone.

But unit sales tell only part of the story. This graph shows the same totals from 1977 to 1980, but represented as a percentage of total computer sales: 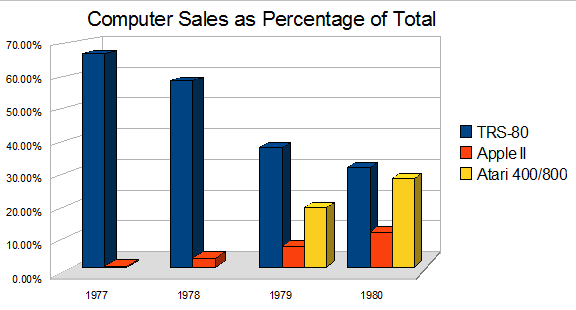 As an interesting side note, the TRS-80 had close to a 70% market share in 1977 (the year it was introduced). It took until 1988 for the IBM PC to exceed that percentage.

very interesting figures which go a long way to setting the record straight!

Were these just USA figures, or global? Did the Commodore Pet feature at all?

The TRS-80 figures are United States only, but I don’t know about the ones for the Apple II and Atari. I haven’t found any reliable sales figures for the Commodore PET, but I believe it sold better in Europe than in the United States.

I had almost forgotten why I stayed with Tandy for so long when the IBM PC was obviously going to be the “winner” eventually. Thanks for reminding me. Tandy had a tendency to design in problems or make mistakes in how they configured their systems, etc. Since the Tandy systems were “closed boxes”, it took a lot more creativity to figure out how to make products for them than to buy a PC manual with schematics, technical data and even the code for the ROMs! So many companies came out with IBM PC boards that I didn’t think a little company like Holmes Engineering could ultimately compete with them, but even more, I realized that the standardization of the buss and the plug in cards in the PC would invite cheap products from off-shore to enter the market. It would have been nearly impossible for us to compete with the relatively good quality products which soon came out of Taiwan, Japan, and other Pacific Rim countries, which were also being sold a lower prices than the little companies which had served the markets for PC peripherals and add-ons before IBM jumped in could survive on. But we had a ball, and wow, what an education! I couldn’t have learned nearly as much from ANY MBA program as I did actually doing business in that market for ten years!

Thanks again, for this and other articles you are posting. They bring back a little of the tingle in my stomach I felt long ago, as well as the “itch” to do something like it again!

I find it interesting to note that the Apple sales didn’t take off until after Visicalc was first published for it in 1979. These figures seems to bear out that theory.

Robert X. Cringely, in his book of microcomputer history “Accidental Empires”, states that Bricklin and Frankston only created Visicalc first for the Apple purely as a matter of happenstance — it was mere chance that the first computer they had available to them for coding was an Apple. Things could have been different if they’d had a Model I instead…

Wikipedia has a screen shot of Visicalc running on an Apple II. 40 columns! Some “ultimate business machine” as Woz says in his book iWoz (see my 2-star review on Amazon.com). Particularly so considering the absent numeric keypad and flakey disk storage.

I went out to that website and saw that Apple NEVER had the lead in terms of overall computer sales. The baton passed from the TRS-80 to the Atari 400/800 to the Commodore 64 to the IBM PC/Clones.

But Apple had the public perception of dominance in sales due to their advertising … “more Apple computers in more places doing more things than any other computer”. Please note that is a nonsense statistic. It was designed to appear to say they had sold more computers than anybody else but because they had not actually done that they included the two debatable, unknowable, and slippery variables of more places and more things.

Larry Holmes? Holmes Engineering? Did you make the BigMem add-in board for the TRS-80 that allowed it to use 96k? I still have my TRS-80 Model 1 with the MicroHatch BigMem! I once ran CPM 1.4 on it, using 0-based addressing and 64k. I also had a friend who disassembled, patched, and reassembled Visicalc for me so that it could access the additional RAM. After the patch, Visicalc said I had 55k free instead of only 23k. It only took him a couple of hours. Printing the dis-assembly listing was the slowest part of the task for him.

When I installed the BigMem, I followed the instructions most carefully and worked over a 3 day period. It worked on my first try.