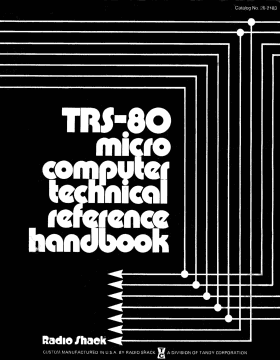 The TRS-80 Micro Computer Technical Reference Handbook (catalog number 26–2103), more commonly called the TRS-80 Technical Reference Handbook (even in the Radio Shack catalog), was the official technical reference manual for the TRS-80 Model I. The first edition, which cost $9.95, was printed in 1978. A second edition, revised to reflect later updates to the Model I, was printed in 1982 (one year after the Model I was discontinued).

But what makes the TRS-80 Technical Reference Handbook unusual is its engaging tone, quite different from most other technical reference manuals. It reads more like a friendly tutorial than a dry technical tome. A dedicated reader with some basic knowledge of digital electronics could study TRS-80 Microcomputer Technical Reference Handbook and discover exactly how the TRS-80 worked. From the preface:

This book is written for the technical person, by a technical person. It was not written to educate the average owner of a TRS-80 micro-computer. If you do not know what Hex means… or how a NOR gate differs from a NAND gate… you are not prepared to repair your computer. (You need some solid digital logic training and this book won’t give it to you.)

If you are a technical person, but have never played around with microprocessors, dive right in! A computer is nothing more than a fast idiot. Don’t let the “idiot” intimidate you. All of the familiar logic is here; there just may be more of it than you’re used to seeing all in one place.

The introduction also sets the tone:

Armed with only a schematic, attacking a TRS-80 computer may at first seem to be the ultimate exercise in futility. But that’s where we come in. This book has been written with those kinds of feelings in mind (matter of fact, the writer went through many of the feelings of trepidation as he was first asked to troubleshoot and repair an early TRS-80…)

Although the handbook made it clear that hardware modifications to the TRS-80 would void its warranty (as it put it, “once you open up the cabinet, you’re on your own”), it somewhat contradictorily also encouraged hardware hacking, stating:

Join the crowd; line up and let’s all learn together. Grab this book, the schematics, and together we’ll attack that TRS-80 with soldering iron smoking.

Other than the Level I and Level II BASIC ROM chips (which were sold directly by Radio Shack), the TRS-80 Technical Reference Handbook provided all the information necessary to build a clone of the Model I. According to Steve Leininger, the co-creator of the Model I, this led to some “corporate fear” about whether releasing such a detailed technical reference was a good idea. But replicating a Model I would require more dedication and skills than most hobbyists possessed, especially when the result would end up costing more than the real thing. (Radio Shack bought parts in a volume that no hobbyist could match.)

I only know of three people who replicated their own Model I using the handbook, so it probably didn’t lose Radio Shack any sales. But it did serve as an introduction for many people who wanted to learn how their TRS-80 worked and helped to create the thriving Model I third-party hardware market.

Not only could it be used to learn how the TRS-80 worked, I did just that. I spent countless hours poring over that book until I learned all there was to know about the TRS-80 electronics. I credit that $9.95 book with launching my engineering career.

I was too young at the time myself (and too interested in playing games), but my father always had this book within easy reach. I still have his copy, and possibly one or two other copies, as well as some photocopies in my collection. At some point I’ll got through my collection in detail and make any duplicates available to others…

I’ve got this book on the shelf right behind me as I sit here at work. An incredible classic.