William Demas is the author of many notable TRS-80 games, including Panik, Frogs, Forbidden Planet, and Forbidden City. In this interview, conducted in July 2011, he discusses his TRS-80 games and experiences.

Q: How did you get started with computers and the TRS-80?

A: I remember it very clearly. I went into a Radio Shack back when I was a teenager in 1977/78 and there was a Model I there that they had running a graphics demo out of David Lien’s book. Seeing that demo hooked me. I was a teenager working part time, so I couldn’t afford to buy a computer outright so I financed it and made payments on it for I believe two years. During that time I delved into BASIC and have been programming ever since.

Q: Where did you get the idea for Panik? 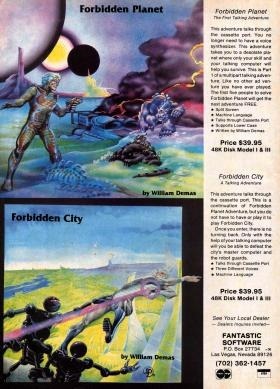 Advertisement from 1982 for Forbidden Planet and Forbidden City

A: I’m honestly not sure where it came from, other than I started piecing together some ideas for an arcade game and coding them up in machine language. I had not written an arcade game before so I think initially it was more or less an exercise in seeing what I could do. I remember having some of the basic elements together initially and showing it to friends to see what they thought of the ideas. Everything else was pieced into the game shell as I thought of ideas as I recall. In fact, I recently ran across a “theory of operation” document that I had written post-development. I don’t recall why I wrote it, but its tone seems to indicate that there were plans to port it to another platform.

Q: You endorsed the TRS-80 assembler M-ZAL in advertisements. Did you use M-ZAL to write Panik? Do you recall any programming tools that you used?

A: I do recall Panik being the one and only TRS-80 program that I developed using an assembler. I don’t recall how or why M-ZAL was selected, but I recall really liking the product and sending a note to the developers telling them so. I believe they then asked me if they could quote my endorsement in their advertisements.

Prior to Panik, my adventures were coded in machine language using pen and paper for the most part to map out logic, jump addresses, etc. I believe I used Super Utility and other tools to peek/poke directly into memory and then save my work onto disk. It sounds like a very inefficient way to work, and it was, but I believe it really helped me develop a good understanding of the Z-80, memory and data layout, and computer architecture in general.

A: Panik and Forbidden Planet were among the few TRS-80 games that offered voices. Did you provide the voice for either game?

Q: No, the voice was provided by Dick Barker. Al Loose, of Fantastic Software, had come across Dick’s work someplace and thought that it would be a great addition to an adventure game. I had written a couple of adventure games at this point and set out to write another using the voice additions. I supplied a list of words/phrases that we would end up using in the games for Dick to digitize. I don’t recall the mechanics of integrating it into the games anymore though.

Q: Do you have any stories to share about your TRS-80 experiences?

A: I recall the night before that Panik was due to ship I was trying to hunt down a bug in which creatures that were not supposed to be able to jump between floors would do so intermittently. I remember pulling an all-nighter late into the next morning tracking it down.

I also recall being a big fan of Scott Adams and his adventures. I had sent Adventure International my Frog game to see if they wanted to publish it. I remember Scott calling me to talk to me and being thrilled talking to him.

Q: What have you been doing since your days working with the TRS-80? 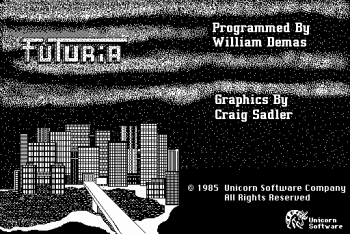 Title screen of Futuria, the Macintosh version of Forbidden City

A: Panik was the last TRS-80 title that I developed. I had started on an Atari 800 port of Frog, but never completed it. I moved onto the original Macintosh platform next and ported Forbidden Planet and Forbidden City over to it as new titles with graphics. Post Macintosh I developed a bunch of educational games for Unicorn Software on various platforms including the Apple IIGS, the Commodore Amiga, and the Atari 800. All during this time I was completing my Bachelors degree in computer science in 1984 and my Masters degree in computer science in 1986. I’ve been working professionally as a programmer since 1984.

My thanks to William Demas for his participation in this interview.

Thanks for this interview Matthew — William Demas' games were among my favorites back when I was using a “real” TRS-80 (and I’m still playing them on your emulator today!) I still remember the the thrill of hearing those voices in Panik and Forbidden Planet. I never knew they were “assembled” with pen and paper — what a job that must have been.

I am greatly enjoying these interviews and getting an opportunity to see some of what happened behind-the-scenes back when my life revolved around my TRS-80 Model 1. This site and your incredible emulator has brought back so many memories.

Great site, great emulator, great interviews, what more can I say? Except thanks.

William also did Adventure #12 in my classic adventure series. Golden Voyage. I mostly helped him edit it and clean it up. The majority of it was his work.