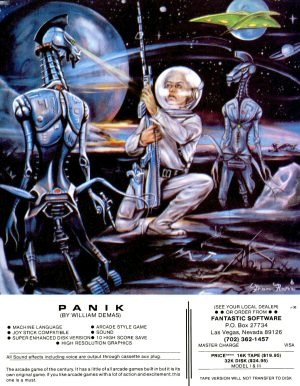 Fantastic Software advertisement from the 1983 Anniversary issue of 80 Micro

Panik was not based on any particular arcade game; as one advertisement described it: “It has a little of all arcade games built in, but is its own original game.” It was written by William Demas, author of three other games for the TRS-80:

One of the advertisements for Panik contained this overview:

It has only been two weeks since the Mzors have invaded Earth. It took them three days to lay waste and conquer Earth and now Earth’s inhabitants have been taken to Mzor slave labor sites on distant planets. You alone have managed to escape them, but they have tracked you down and have you trapped at one of their building sites. Your mission is to rid the galaxy of the Mzors forever, but you know that this will not be easy. Mzors are very intelligent because they are half animal and half machine. Their leaders are very difficult to destroy and are capable of creating more Mzor warriors at will. Your only weapons are your energy pistol, your short range transporter pack, and your courage. All of mankind is depending on you. 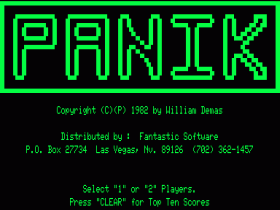 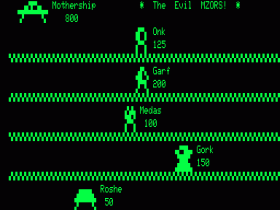 Panik takes place in a building with five floors which are connected by ladders. The goal is to destroy the different aliens that have invaded the building. Panik is unusual (at least for a TRS-80 game) in that the playing field is far wider than the screen. The screen automatically scrolls to reveal the full playing field as the player moves. In addition to moving and using the ladders, the player can also transport to a random part of the building, at the cost of five energy units.

Complicating the game is the fact that every shot fired uses energy. This gives the player a limited (and quite small) number of shots. Unlike many other rapid-fire games, in Panik it is very important to make every shot count. Energy can be replenished by claiming small supplies (identified by numbers) that are scattered around the building. 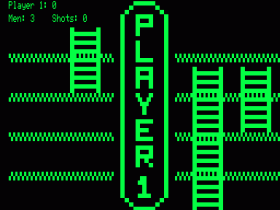 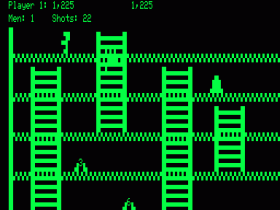 The supply of aliens is periodically replenished by a mothership that flies overhead. It is impossible to shoot at the mothership using normal shots (which always fire horizontally). The only way to destroy the mothership is by using the plasma cannon located at a changing spot near the top of the building. Hitting the mothership with the cannon is very difficult, but prevents any more aliens from appearing.

The aliens differ in abilities and intelligence. Some can be quite cunning, especially as the game progresses. Not all aliens can be destroyed; some must simply be avoided. 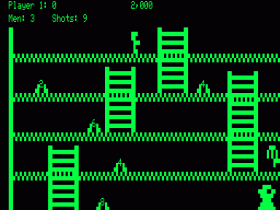 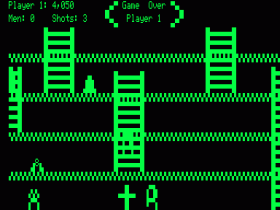 Two of William Demas' other programs, Forbidden Planet and Forbidden City, were billed as “talking adventures.” Panik is also a talking game and the disk version contains an unusually large number of phrases (around a dozen). Some examples include “Warning, all defense weapons armed,” “Ouch, I’m dead,” and “Game over, Commander 1.”

Very cool. Nothing beats the fun factor of early speech synthesis. It’s a shame more games like this didn’t incorporate them.

Panik was a great game. Brings back a few memories to see those screen shots.

And I agree that the speech synthesis did add a bit… Robot Attack!

Definitely one of y favourites – I’ve all but forgotten about this game! Thanks for reminding me Matthew, time to dig out the emulator again!

Yes this also brings back great memories for me, it was 1983, i was on a YTS (youth training scheme), i always couldn’t wait until lunch time when they would let us play on the TRS-80’s, this game being my favorite.

I will try recreate this game on my PS3, using the creation tools in LittleBigPlanet 2 when its released.

Hopefully i will make a good clone of this, i have always wanted to remake this game but due to my lack of coding skills never could.

I will name it Panik Evolved, so you guys can find it, wish me luck i will need it.

Thanks for the kind words folks. I wrote that game 30 years ago. It was the first, and only, time that I used an assembler on the TRS-80. I’ve just recently run across this review and had to go grab Matthew’s emulator and a copy of the game to look at it once again. It brought back a lot of memories.

This reminds me, to this very day I occasionally use the phrase, “OK, nothing happened”, attempting to mimic the voice. At least it sounds exactly like it in my head!

The game is very nice but quite difficult as fur as you progress. So I made some cheat patch (invincibility and bypassing ladders) … just for fun and for looking how far the game’s end can be reached in this case. But it seems to be a neverending game. I gave up after a hour.