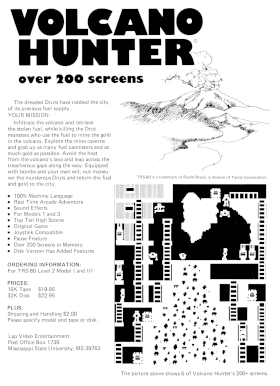 Volcano Hunter advertisement from the February 1984 issue of 80 Micro 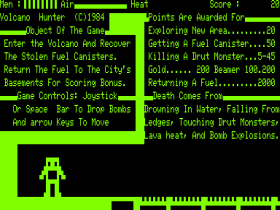 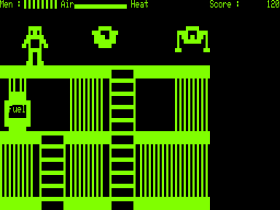 Druts and a fuel canister

The primary goal in Volcano Hunter is collecting fuel canisters and returning them to the basement. Either the arrow keys or a joystick can be used to control the player. Bombs can also be set using the SPACEBAR or joystick FIRE button, with the length of the press determining the delay before the bomb explodes. Bombs need to be used carefully because an explosion will destroy not just a Drut but also the player. Other ways to lose a life include touching a Drut, falling off a ledge, running out of air when underwater, or getting too close to the lava. To help avoid the last two, the amount of air remaining and the heat level are always displayed at the top of the screen near the score. 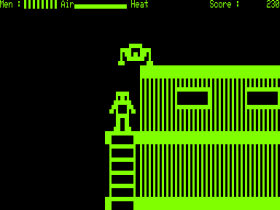 More Druts and a ladder 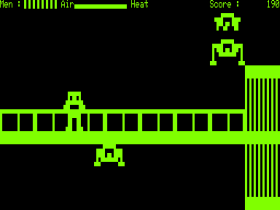 Unusually for a TRS-80 game, the Volcano Hunter playing field is much larger than the screen. (Others include Swamp War, Panik, and Time Bandit.) The game contains 200 screens and the variety is the most notable feature of Volcano Hunter. I suspect that many players just had fun exploring all the screens in the game. 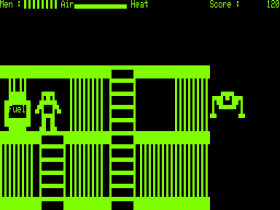 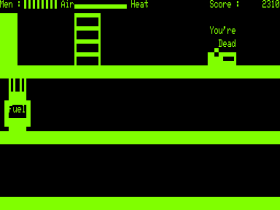 Volcano Hunter had a resurgence of interest in 1991, when Gary Shanafelt wrote an article titled “The Great Volcano Hunter Hack” for TRSTimes. He detailed a project undertaken by Kelly Bates, who spent two years mapping all the screens in Volcano Hunter. Bates used the TRS-80 Dotwriter utility and a Gemini dot-matrix printer to print out the entire game map on multiple sheets of paper, finishing on February 18, 1986. Many people used these maps to explore areas of the game that they had never seen before.

More recently, George Phillips dumped a complete map of Volcano Hunter as a 20,480 by 8,280 pixel image. This incredible image is a great companion to the game and can be downloaded here: volcano-hunter-map.png (thanks to George Phillips for the map).

In 2011, David Smith created a Volcano Hunter page on Facebook. In 2015, Mark McDougall ported Volcano Hunter to the Microbee, an Australian computer from 1982. It can be downloaded from the Microbee Software Preservation Project.