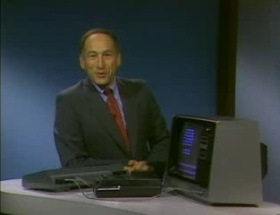 Stewart Cheifet with his Model I

But at the start of the show, Stewart Cheifet, the long-time host of Computer Chronicles, showed off his first computer: a Model I that he bought in 1978. He pointed out the various parts of the Model I and showed how a program tape loaded. He then demonstrated the Leo Christopherson program Dancing Demon, or as he put it: “multimedia in the 1970’s”

Also in the show was a longer segment about the Color Computer. If you’re interested, you can watch the episode or many other episodes as part of the Computer Chronicles collection at archive.org. It’s interesting to see the TRS-80 as featured on a nationally broadcast program.