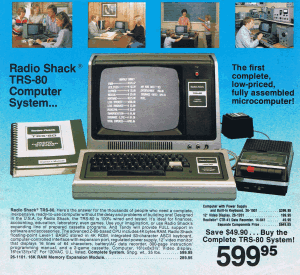 TRS-80 Model I from a Tandy Computers catalog

Now that the Radio Shack computer project had been approved by Charles Tandy, the question was how many computers to build. Steve Leininger and Don French both felt that 50,000 units was a reasonable number. That figure was considered laughable (literally) by those in charge, who felt that 1,000 units was more reasonable. (A number that seems absurdly low when you consider that MITS sold 1,000 Altair computers in February 1975 alone.)

The 1,000 target was later increased to 3,000. At the time, Radio Shack had slightly over 3,000 stores. It was decided that if the computer failed to sell, the 3,000 units built could be used in the stores to keep inventory.

Actually, French described it as being phrased “when” the computer failed to sell. There was very little confidence in the project in the upper levels of management at Radio Shack. According to a 1981 InfoWorld article, one executive expressed his disapproval to French with this message: “Don’t waste my time – we can’t sell computers.”

One of the biggest problems we’ve had is that corporate people who make decisions – you know, we’d come in and say “we’ve got the greatest thing since sliced bread, a computer everyone’s going to want.” They didn’t want to commit to it.

Now the challenge was to convert the computer design from a hand-built unit, with wire-wrapped breadboards “under the table,” into a finished unit that would fit in a small case. The BASIC needed to be finished and the computer needed software and documentation. And all this needed to be completed in a matter of months.

Two more prototypes were built during this time for new members of the team. Van Chandler headed the (initially one-man) “software applications group” in charge of writing software for the computer. Dr. David Lien was responsible for writing the documentation, which became the highly regarded book Learning Level I.

Other important details needed to be finalized. The computer itself was named the TRS-80, with the three letters standing for Tandy Radio Shack, plus 80 for the Z80. It would be marketed under the Radio Shack brand instead of the Micronta or Realistic brand usually used for technical items. The price would be $599 and it would come with a monitor and cassette recorder. The date for the official introduction was set for August 3, 1977.

Total development costs for the TRS-80 ended up being under $100,000, a remarkably low figure for a product of this magnitude.

The Demonstration at the Warwick Hotel

Enough TRS-80 computers had been built by August 3rd for a demonstration for the press at the Warwick Hotel in New York City. Six TRS-80 computers were used, although ten were taken along in case any exhibited problems. (The six worked fine and the other four weren’t needed.) Ten years later, John Roach recalled about the event, “There wasn’t much computer media then. In fact, most of the media didn’t know what a microcomputer was, much less care.”

But as it turned out, August 3, 1977 was a really bad day to announce a new computer in New York City. At 9:37 a.m., possibly while the Warwick Hotel event was taking place, a bomb exploded in the Defense Department office in the Christian Science building. Luckily, the bomb was discovered just seconds before the blast and no one was injured. A second bomb exploded at 10:44 a.m. in the Mobil Oil Corporation building. This explosion killed one person and injured seven others.

The terrorist group FALN claimed responsibility for both explosions. No other bombs were found but telephoned bomb threats, apparently all hoaxes, caused both towers of the World Trade Center and seven floors of the Empire State Building to be evacuated. The New York Times headline the next day read “100,000 Leave New York Offices As Bomb Threats Disrupt City.” The TRS-80 demonstration received almost no media coverage at all.

Radio Shack had much better luck at the Personal Computer Fair at Boston University on August 5, 1977. The Radio Shack booth had TRS-80 computers set up under the banner “The New Radio Shack Micro Computer” with the additional suggestion “Drop in for a demonstration.” People did drop in and the booth was packed. The appearance at the Personal Computer Fair garnered all the publicity and media coverage that the Warwick Hotel event hadn’t. The Associated Press story said this about the TRS-80:

The Radio Shack system exhibited at the fair is expected to be available in some stores next month. It consists of a cassette tape recorder used to run programs into the computer, an integrated typewriter-like keyboard and computer unit, and a small television set to display information.

Tape cassette programs – which tell the computer how to do something – will make Radio Shack’s system able to do a payroll for up to 15 people in a small business, teach children mathematics, store your favorite recipes or keep track of an investment portfolio. It can also play cards.

(One newspaper optimistically summarized that article with this headline: “Home Models Play Cards, Do Taxes.")

The incredible demand for the TRS-80 became evident shortly after the show. Radio Shack received hundreds of pre-orders by mail. Radio Shack headquarters soon received 15,000 calls, temporarily overwhelming their telephone switchboard. Within a month and a half, there were over 10,000 pre-orders for the TRS-80. Demand was so great that Radio Shack began requiring a $100 deposit to be put on a waiting list.

Radio Shack had an advantage over other companies entering the computer market because it already owned factories and had experience with production. It began to fill TRS-80 orders in September, although it took nearly a year to catch up with all the orders. Even with the late start, Radio Shack had almost 70% of the microcomputer market in 1977.

Curiously, Radio Shack still didn’t recognize the demand from the home market. Radio Shack’s 1977 annual report described the TRS-80 as “probably the most important product we’ve ever built in a company factory” but also stated:

The market we forsee is businesses, schools, services, and hobbyists. The market others apparently foresee is “in-home” – computers used for recipes, income tax, games, etc. We think home use is a later generation happening.

Far from being a failure, well over 100,000 TRS-80 computers were sold in 1978, more than four times its nearest competitor. This accounted for an estimated 10% of Radio Shack sales that year. What is interesting is how several of the strongest opponents of the TRS-80 project then became, in retrospect, its strongest supporters. The “official” histories changed quite a bit over time, and in those histories these individuals became the champions of the project against great odds.

But Don French and Steve Leininger were the true “fathers of the TRS-80” and they deserve the credit.

Previous: The Introduction of the TRS-80 (Part 1)