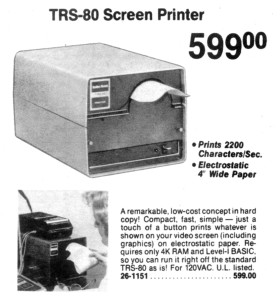 The TRS-80 Screen Printer from a 1979 Radio Shack catalog

Because the Screen Printer didn’t need an Expansion Interface, it could work on any Model I, from a 4K cassette-only Level I to a 48K Level II with floppy drives. In fact, the Screen Printer was the only Radio Shack printer to work with a Level I TRS-80 Model I.2

The Screen Printer was an OEM version of the Rotary Printer manufactured by SCI Systems, Inc. of Huntsville, Alabama.

The Rotary Printer was a patented design that could print very fast (for the time) at 2,200 characters per second. As SCI Systems put it, the Rotary Printer could “print Lincoln’s Gettysburg Address in 3/4 of a second and the entire Constitution in 12 seconds.”

The Screen Printer used four-inch wide “electrosensitive paper.” Although not identical to the aluminum-coated paper used by the TRS-80 Quick Printer, it was very similar. Many people disliked aluminized paper because the aluminum coating tended to wear off with handling. On the other hand, the paper photocopied well and it “will not fade and is not affected by heat or light.”

Additional rolls of aluminized paper for the Screen Printer (item number ACP-0001) could be purchased from Radio Shack National Parts for $14.95 for three rolls.

The TRS-80 Screen Printer was advertised briefly in 1978 and 1979. It only worked on the Model I and was fairly expensive for a printer that could just print the contents of the screen3. This was especially true when compared to the less expensive Quick Printer, which was introduced slightly after the Screen Printer.