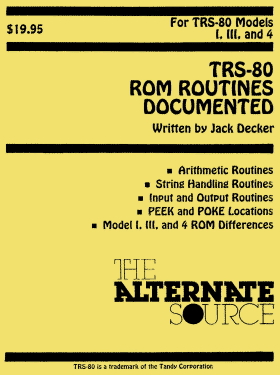 The bulk of TRS-80 ROM Routines Documented is composed of five chapters detailing various portion of the TRS-80 ROM:

In addition, there are eight appendices about various TRS-80 topics:

There is also a preface by Dave McGlumphy and an afterword by Charley Butler (publisher of The Alternate Source).

Much of the information in TRS-80 ROM Routines Documented, such as the descriptions of the TRS-80 ROM differences, was never published anywhere else. I think that one of advertisements from The Alternate Source gave an excellent description:

This book is more than just a disassembly. Jack gives you a good education. He goes beyond one-line comments and gives you the “big picture.” He shows you the background and the whys and wherefores of the ROM subroutines. He offers tips and suggestions, and he warns you of the pitfalls that can drive you bonkers when you use a subroutine knowing only enough to be dangerous.