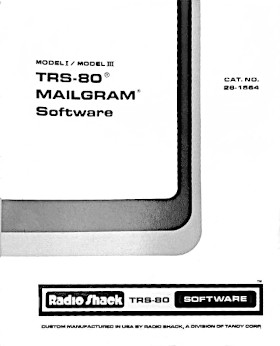 The price of a Mailgram message depended on several factors, such as the number of recipients. (More recipients meant a lower price per message sent.) Both the 1972 Life advertisement and a 1977 New York Times article quoted a price of $1.60 for a 100 word message. Adjusted for inflation, that would range from seven to ten dollars in today’s money.

TRS-80 Mailgram provided a way for businesses to send Mailgrams using a TRS-80, rather than the Telex terminals normally used. It was described in the November 21, 1979 issue of InfoWorld:

An article in the July 1980 issue of 80 Microcomputing described the advantages of Mailgrams as “their speed, compared to regular mail delivery, and their cost, compared to telegram rates.” They also said that Mailgrams sent using the TRS-80 software were charged at “lower rates than the general public.”

Reading the TRS-80 Mailgram manual shows that the package was targeted at businesses. (Not surprising, given the high mailing costs.) For example, here is the sample message used in the manual to demonstrate message sending:

THERE WILL BE A NATIONAL SALES MEETING IN THE CHICAGO OFFICE ON THURSDAY, APRIL 14. ALL SALES MANAGERS ARE EXPECTED TO ATTEND. THE MEETING WILL BEGIN PROMPTLY AT 8:00 AM.

One of the more interesting features of Mailgram involved address lists used for mailing to multiple recipients. Custom lists incurred additional costs for storage, which seem to have been 5 cents per address per month. But Mailgram also provided a number of common industry address lists. These included:

This provided a straightforward, if rather expensive, way for businesses to send (for example) an announcement to every radio station or every daily newspaper in the United States. The manual stressed the high costs associated with this feature:

The following feature should not be tested. This feature will send thousands of Mailgram messages at one time. It should only be called when you actually want to use this feature.

The Mailgram software only appeared in the Radio Shack catalog until 1982.