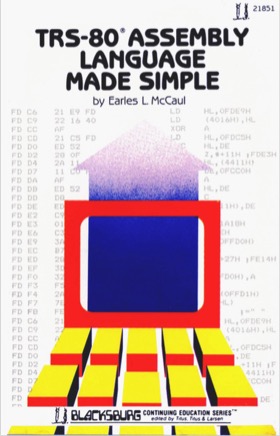 McCaul approached various publishers looking for just such a book, but with no success. The Blacksburg Group didn’t publish a suitable book, but they suggested that McCaul write one himself. The resulting book was TRS-80 Assembly Language Made Simple, one of the more than seventy books that were part of the Blacksburg Continuing Education Series published by Howard W. Sams & Co, Inc.

There are eight chapters in TRS-80 Assembly Language Made Simple:

There are also seven appendices containing additional useful information, such as a numerical list of all the Z80 opcodes (something surprisingly difficult to find at the time), a summary of all the Z80 instructions that affect the flags, and a list of the most important Level II BASIC ROM routines.

One of the best parts of the book is a chart titled “Tips, Tricks, and Techniques ( … Things I Wish They’d Told Me Before … ).” The chart is a list of sixteen quirks or unusual details that are apt to trip up a beginning TRS-80 assembly language programmer.

Because of its speed, assembly language is sometimes the only alternative, such as real-time processing of data, performing lengthy iterations or repeated operations, and sorting large arrays of data. A rule-of-thumb for determining when to use assembly language is, “If money can’t buy it, use assembly- or machine-level language.” Loosely translated, this means that when time or extra memory beyond what’s available is needed, the only alternative is to utilize either assembly- or machine language. Why? Because money cannot buy time, nor can it buy 2097 bytes of memory for a 2096 byte memory computer.

Howdy! Glad you liked my book