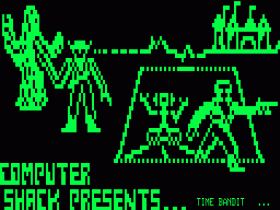 Time Bandit, written by Bill Dunlevy and Harry Lafnear, was a TRS-80 Model I/III game first released by Computer Shack in 1983. Computer Shack (which changed its name to Michtron in 1984) also released versions of Time Bandit for a number of other computers:

The Atari ST and Amiga versions in particular remain quite highly regarded today.

Other than the color graphics, the TRS-80 Color Computer version is largely the same as the TRS-80 Model I/III original. But the later versions have extra worlds and other features. For example, the two-player mode, the time log, the text adventures, and the ability to save the game were all added after the TRS-80 version.

When the Atari ST and Amiga versions of Time Bandit became popular, many people assumed that the game was based on the arcade game Gauntlet, released by Atari in 1985. This was obviously impossible because the TRS-80 version predated it by two years. According to co-author Harry Lafnear, Time Bandit was actually inspired by the arcade game Tutankham which was released by Stern in 1982. 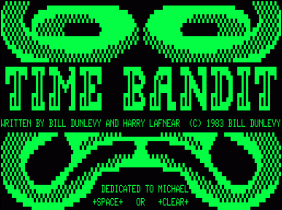 Additional obstacles include the monsters guarding the treasure and one-way corridors which require a different path to return. Being hit or shot by a monster depletes your power, and there is a limited amount of time to complete each world.

There are three different worlds in the TRS-80 versions of Time Bandit: Western World, Space World, and Fantasy World. Each world exists in a different time period and the graphics are designed to match that motif. Within each world, there are seven portals that provide access to different locations.

Each portal can be entered multiple times, but the layout within changes every time. Every four times through, the number of locks in the layout increases. Completing a portal sixteen times closes it and generates a secret message. 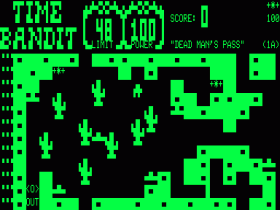 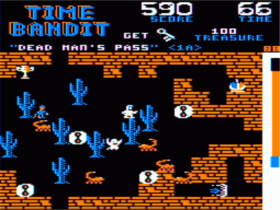 The TRS-80 Model I/III and the TRS-80 Color Computer versions share an almost identical map, with three worlds and seven portals per world. Both versions also share the same names for the portals: 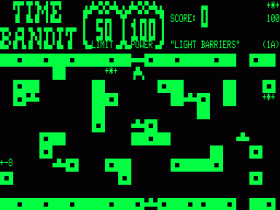 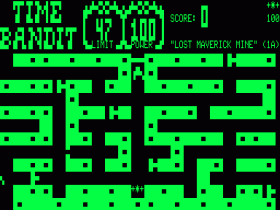 Lost Maverick Mine in Western World 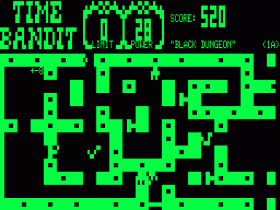 The later versions for non-TRS-80 computers had more worlds with different names.

Although the Atari ST and Amiga versions of Time Bandit are the most famous, the TRS-80 versions are very enjoyable games.

Very cool. I have the Atari ST version of this, but I was never aware there was a TRS-80 predecessor. I’ll have to check it out (I may even have a copy in my collection and just not been aware of it). I’m also impressed by how similar the screen layouts are in the TRS-80 and CoCo versions. There are very few cases where ported TRS-80 games are instantly recognizable like that.

One of my favourite TRS-80 Model I/III games. I was very impressed at the time.

Thanks for the gracious comments and posting the information one of my favorite creations!

I love my old games but no longer have coco 3. I am looking at buying one for old time sakes and was wondering how I can buy your old games Time Bandit and Cashman. I loved thise games

To Bill Dunlevy & Harry Lafnear– Time Bandit was the greatest arcade-style game I ever played, and I played a lot of games. The Atari ST version was a marvel, and even after hundreds (thousands?) of hours of play, I never finished it. But that only made it more fun!

Someone has posted the completion of Excalibur and the end of the game on YouTube for those who are interested: http://www.youtube.com/watch?v=UDYtMpLZ7XU

Loved “The Insidious Grid” level. This game was great stuff on my TRS-80 CoCo back in the mid 1980s. Two other games I loved was Worlds of Flight, and Donkey King.