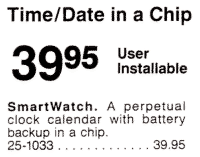 Portion from a 1989 Radio Shack catalog

Installing the SmartWatch on a Model I, III, or 4 was fairly simple, requiring only that a jumper be used to connect two pins of the chip. The TRS-80 SmartWatch drivers that most people used, CLK1/CMD, CL3/CMD, and CLK4/CMD, were written by Duane Saylor. They worked on a wide range of operating systems, including LS-DOS, LDOS, DOSPLUS, NEWDOS/80, and TRSDOS 1.3.

The SmartWatch battery was only rated to last ten years, but I have one that is twenty years old and still going strong. Dallas Semiconductor, now a division of Maxim Integrated Products, still sells the DS1216E, making it one of the few TRS-80 add-ons still available today.