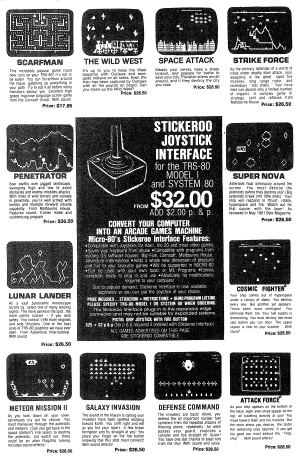 Stickeroo advertisement from the July 1983 issue of Micro-80

Micro-80 showcased the Stickeroo in advertisements alongside TRS-80 games with the headline “Convert your computer into an arcade games machine.” The advertisements (duplicating those of Alpha Products) also served to advertise the games, which mostly came from companies from the United States such as Big Five Software, Adventure International, and Fantastic Software. Importing software was tricky due to variable exchange rates and the prices given were always for current stock only.

The Stickeroo Joystick Interface used the same joystick standard as the Alpha Joystick (sold by Alpha Products) and the TRISSTICK (sold by Big Five Software). This meant that it was compatible with most TRS-80 games, including all of the games sold by Micro-80.

The Stickeroo Joystick Interface originally cost $49.95 (Australian) and included both an Atari joystick and joystick interface. Later on, the joystick and interface were separated “due to popular demand” so that customers could supply their own joystick. The new price for the Stickeroo Joystick Interface (without a joystick) was $32.00 (Australian). For customers who also needed a joystick, there was a “pistol grip joystick with fire button” for $25.00 (Australian).

Micro-80 advertised the Stickeroo Joystick Interface until mid-1983, although it is possible it was still available past that time.

You have some interesting articles on this site Matthew, that’s for sure!

Despite living in Australia, avidly reading Micro-80, and especially pouring over the advertisements each month, I _still_ don’t recall ever seeing the Stickeroo (and with a name like that, I wouldn’t think I would forget it!?!) Hmm…

I’m pretty sure my father ended up adding an Atari joystick adapter to one of his Model I’s by wiring it into the keyboard arrow/space keys… but the irony is that the actual Atari joystick was such a crappy joystick that it was much more preferrable using the keyboard! Not to mention there was simply no way you could play Penetrator with a joystick!

As I recall, they advertised the Stickeroo pretty heavily in 1982. Two things about the advertisements always stuck in my mind: the name Stickeroo itself and the fact that the game pictures and descriptions were otherwise identical to the Alpha Products advertisements.