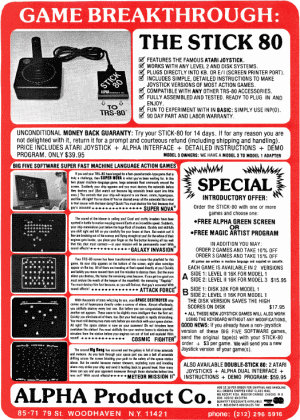 The interface itself was quite simple. An Atari joystick was capable of movement in eight directions. The STICK-80 used the lower four bits of port 0 to map the four main directions (UP, DOWN, LEFT, RIGHT). The FIRE button was mapped to the impossible combination of UP plus DOWN. In-between directions (such as UP plus RIGHT or DOWN plus LEFT) used two bits. This was a very clean design and made joystick support easy to add to games. The December 1980 advertisement stated: “Software authors and distributors: contact us for joystick conversion package for your existing games.” Within a year, almost all TRS-80 games had joystick support.

By the March 1981 advertisement, the price had increased to $39.95, but the package now included a demo program. Alpha Products also started selling Big Five Software games along with their joystick. With a purchase of a STICK-80, you could also take 10% off if you ordered two games, or 15% if you ordered three games. As part of the same deal, Alpha Products would also upgrade non-joystick versions of Big Five Software games for $3.00 per tape.

The March 1981 Alpha Products advertisement also featured the first appearance of the DOUBLE-STICK-80. This package included two joysticks, interface, and demo game for $59.95. The second joystick was mapped to the same port as the first, but it used the upper four bits instead of the lower four. The DOUBLE-STICK-80 sounds like an interesting idea, but I have never found a program that was designed to use it. The DOUBLE-STICK-80 was no longer mentioned in advertisements just a few months later.