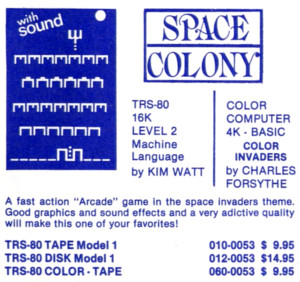 Space Colony was a TRS-80 adaptation of the 1978 Taito arcade game hit Space Invaders. It was written by Kim Watt and sold through his own company, Breeze Computing. Kim Watt was better known in the TRS-80 world for his disk utility, Super Utility. Space Colony was also sold by Adventure International for $14.95 for the Model I disk version, and $9.95 for the Model I tape version.1

Interestingly, Space Colony wasn’t the first version of Space Invaders that Kim Watt wrote for the TRS-80. He had earlier written Invaders, a game distributed by Level IV Products. Space Colony was a good rendition of Space Invaders and had superior graphics and game play to Invaders. But it had one very unusual feature: it was one of the few commercial high-resolution Model I games. 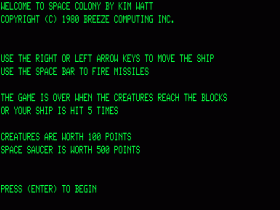 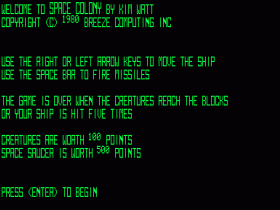 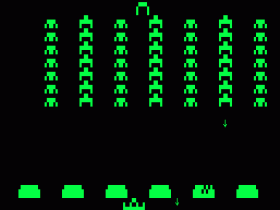 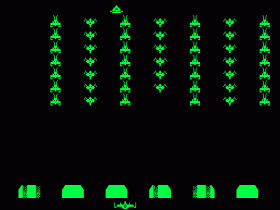 Space Colony and Kim Watt’s other games were soon overshadowed by the success of Super Utility. Space Colony wasn’t advertised beyond early 1981.

In 1986, PowerSoft collected four Kim Watt games (including Space Colony) in a package called “The Kim Watt Games Disk.” As far as I know, the high-resolution version of Space Colony wasn’t included in that package.

I had not heard of any commercial games from that time that took advantage of any of the hi-res boards. How many others were there?

I have a handful of commercial games for the PCG-80 programmable character generator. However, I’m not 100% sure they were all sold with hires support, or modified by users.

Software archives from Ira’s site appear to contain the source for Kim’s Space Colony in a text file! I haven’t had a chance to try to assemble it…

Thanks for finding the Adventure International entry for Space Colony. I have updated the article to reflect this.