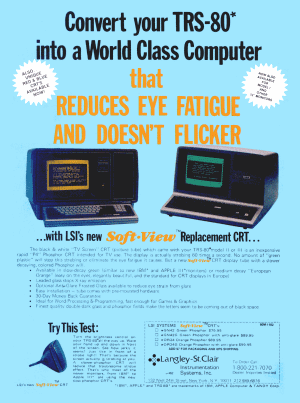 One popular solution was the Soft-View replacement CRTs from Langley-St. Clair Instrumentation Systems, available for the Model I, Model III, Model 4, Model 4P, and Model 16. Their replacement CRTs used a slower-phosphor tube that was much easier on the eyes and virtually eliminated flicker. Here’s a quote from one of their advertisements:

Turn the brightness control on your TRS-80 all the way up. Wave your hand up and down in front of the screen. See how jerky it seems? Just like in front of a strobe light! That’s because the screen actually is strobing at you. A slower-phosphor CRT will reduce that troublesome strobe effect. That’s why most of the newer monitors, from IBM to Apple III are using the same slow-phosphor CRT’s. 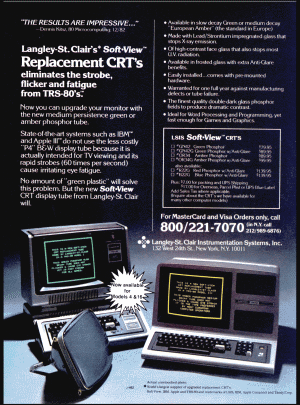 The Soft-View CRTs were originally available in two colors:

Langley St. Clair continued to advertise and sell the Soft-View CRT as late as 1986. Their later advertisements mentioned that the Soft-View was available for the “TRS-80, TeleVideo, Kaypro, Heath, DEC, Zenith, IBM PC, Apple III, and a wide variety of other monitors.”

The one disadvantage of a slower phosphor was the faint trail left behind by moving objects, especially in fast moving games. But that was easy to adapt to and I think most people felt that it was a fair tradeoff for the superior comfort and picture quality.

Tandy used a slower-phosphor green tube in the Model 4D that was similar to the Soft-View and the difference is remarkable. I still consider that to be the most restful CRT screen I have ever used.