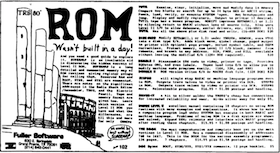 A lesser known way of stopping the reboots was Silver-It, sold by Roger Fuller through Fuller Software of Grand Prairie, Texas. Silver-It worked by recoating the oxidizing contacts with silver. Like gold, silver won’t corrode when exposed to oxygen (at normal temperatures). Fuller Software advertisements promised “increased reliability and wear” and said that Silver-It would “stop those mysterious reboots.” As Dennis Báthory-Kitsz described it in his book The Custom TRS-80 and Other Mysteries:

This is a process that must be completed with great care, but will result in connectors that (except in chemically violent atmospheres in major cities) need virtually no cleaning. For Radio Shack repairs, this process looks like no modifications have been made.

The complete Silver-It package cost $5.00, which included silver solder and solder wick. Additional tools necessary (but not supplied) included a soldering iron, pure alcohol for cleaning (such as Everclear or absolute alcohol), and solder flux.

Applying Silver-It was not for the inexperienced and did require some degree of soldering skill. Fuller Software promised a full refund to anyone unsure of their ability to install Silver-It after purchasing.

The basic procedure was to use the solder wick to remove the solder from the offending contacts and then apply new silver solder to the contacts. The trick was to carefully clean the contacts between steps and to make sure that no solder bridges were created in the process. This needed to be done for both the Model I and the Expansion Interface connectors. One 80 Microcomputing reviewer estimated that the whole process took him two hours.

Like Gold Plug 80, Silver-It effectively eliminated Model I reliability problems. Silver-It was also less expensive than Gold Plug 80 or gold plating the contacts manually. It also had the advantage (unlike manual gold plating) of not using cyanide as part of the process.