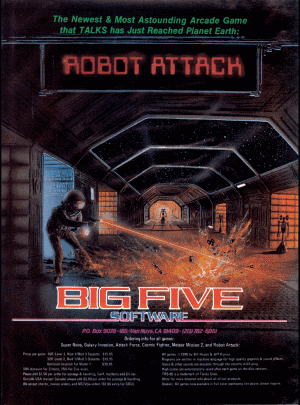 The first advertisement for Robot Attack in 80 Microcomputing

One of the most distinguishing features of Robot Attack is the voice, which is that of Bill Hogue himself. The speech is especially remarkable when you consider that encoding voices for arcade games was incredibly expensive at that time; the voices in Berzerk are estimated to have cost tens of thousands of dollars. The disk version of Robot Attack has much longer sections of speech, including the impressive: “Great Score, Player 1. You have achieved the highest score so far. Enter your initials carefully so that we may save them permanently.” 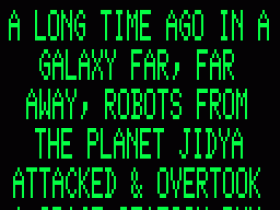 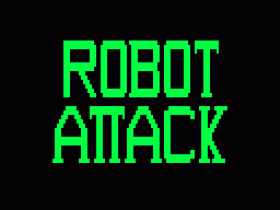 Robot Attack features an extended scrolling title sequence (think of Star Wars). This sequence leads into an impressive transition to the title screen.

At the beginning of the game, you are in a room that is stocked with robots. The goal is to destroy as many robots as possible and exit the room. The faster you clear the room, the more bonus points you receive. The walls to the room are electrified and will destroy you if you touch them. The robots are also deadly to your touch. What makes it interesting is that the robots are also destroyed if they touch the walls. You receive points for each robot destroyed, even if it walked into a wall on its own.

Different robots have different behaviors. Some stay in the same spot and others move towards the player. By observing their behaviors, you can often fool the robots into walking into a shot or the wall. You can sometimes clear a room without firing a single shot. 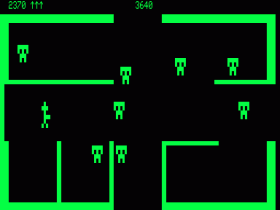 Start of a room 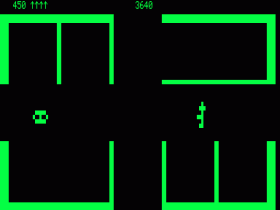 The flagship has appeared

At the beginning of the game, the robots don’t shoot at all. But once the score passes 1000 points, the robots do start shooting. This makes the game much more difficult. The robots are indiscriminate with their shots; they will shoot other robots if they get in the way. You can often use this to your advantage.

After a certain amount of time has passed, the Flagship appears. Contrary to its behavior in previous Big Five Software games, the Flagship fires no shots and can’t be destroyed. Instead, it steadily moves towards you, moving through walls and destroying any robots in its path. This puts a definite time limit on each level; you have to flee the room or be destroyed. The Flagship follows your movements, which means that clever players can make the Flagship touch and destroy robots left in the room. 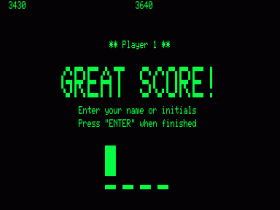 Type in your name 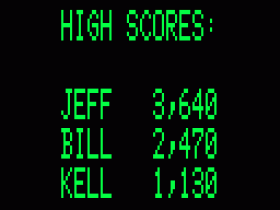 If you beat one of the high scores, then you can add your name to the scoreboard. The high scores are displayed graphically and they scroll like the title text. The disk version permanently saves these scores.

This is great!. For some reason I was thinking back to High School in 82 and we had just got a new computer lab (pretty impressive for a High School back then!). We had gotten Model IIIs with the speech synthesizer and all the bells and whistles.

We also had a copy of Robot Attack! Unfortunately never got to play it because it was hogged by the guy who brought it in and his cronies. Why I remember this is for two reasons:

Thanks for creating this page and giving me a chance to waste your time with my trivial, but I feel worthwhile, story!

I think my parents got *real* sick of hearing those words but I couldn’t get enough of it. We never had a joystick so it was all up/down/left/right arrow buttons for us but pretty soon you got used to combining them to move and shoot diagonally.

This game was likely the first case in the world where sentences were made up from a set of recorded single words and because words recorded individually had no context the sentences sounded strange – but back then it was ‘cool’ strange.

In “Great score Player 1” the Great score part was said in an excited, almost yelling tone which was a completely different tone to the ‘Player 1" which was in a lower and more serious tone.

I recall the pitch/tempo of “Player 1” being randomly set each time!?! Obviously “Player 1” was used at the start of each life, as well as being combined with “Great Score”, another reason it sounded so disjoint. But I still recite it in my head – and sometimes out aloud – as you have described, a higher pitch “Game Over” and a slower, low pitch “Player One”! People think I’m strange…

I was way more proficient on the TRS-80 arrow keys than I was with a joystick back then. In fact, to this day I believe the layout of the arrows on the TRS-80 Model I/III keyboards was way superior to the ‘cluster’ layout on the PC. The only advantage to the PC layout is it leaves one hand free for multiple keys, whilst the TRS-80 pretty much restricted you to the SPACEBAR and perhaps the ENTER key if you need all 4 arrows. I thought the key mapping for Penetrator was brilliant, Eliminator was a little more challenging! I still can’t use a PC keyboard for 8-way shooters…

Big Five Software was without a doubt a cut above the average TRS-80 game publisher, and Robot Attack was one of the best of the best. It’s one of my ‘go-to’ games when I’ve running a TRS-80 emulator and feel like a quick blast from the past…

In the early 80’s this game was truely outstanding because of the sound effects.

This was before the days of sound cards and graphics cards, the main processor did everything. This severly limited the sound effects that games could have, to monotone beeps and buzzes.

All the processor could do was cycle the output to the speaker on or off to generate square waves. There was no volume control – even the beeps sounded harsh. I’m sure the TRS-80 was never designed with speach synthesis in mind, but somehow the game makers managed to do it.

“Robot Attack!!” was my and my brother’s motto when doing a “surprise attack” on each other while playing outsides. We used to play this game on a computer store and were fascinated by the computer voice ( I had a Zx-81, mind you, the TRS-80 was too expensive for us). Good old times…

Robot Attack was one of the best TRS-80 games. I played it and Asylum nonstop for weeks. More recently I like playing Nukliex. TRS-80 games are a lot of fun.

The article claims that robots begin to shoot past 1000 points, yet as far as I can tell it is based on room cleared or something else not point wise, as for me they generally start shooting past 2000 points, but sometimes earlier. I usually destroy all the robots before exiting the room to get the bonus, but if you were to only kill a few robots in each room, you would clear each room with fewer points, leading to robots shooting sooner.

Nice Comments. I remember reading in a TRS-80 magazine Them talking about this game saying something like they were real impressed how can get the TRS-80 to talk out of the cassette port. I order that game right away. I remember took a wile to get it. It sort of sounded like a CB radio and I remember thinking if they could do this better could do music with it and not to long after they came out with CD music disc. I made a little z80 machine language program to out put to the cassette and it make little clicks and I thought just do this faster to make sound.

Out of a TRS-80 magazine I order some hardware to make the sound sound better. I solder it in to installed it but it did not make it that much better.

I got the TRS-80 going to radio shack with my Mom and telling her how good computers are and she bought it for my Dad but my Dad did not use it and I was. It cost $700 and I paid my Mom back in payments. Never capped track and I just said one day I think paid it off by now and my Mom said she thinks so too.

I got the expansion interface and disk drives for it. A $700 MX80 printer too. Made a machine language to do that and had so it would load from disc on a reset and print out the screen. But when they came out with the model 3 the ROM code cleared the screen on a reset for it did not work on that.