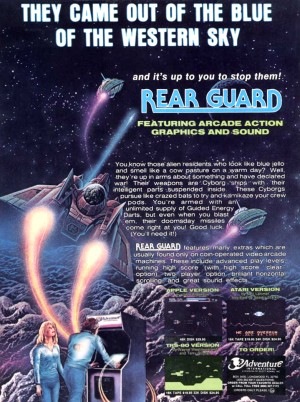 The original version of Rear Guard was written by Neil Larimer (assisted by Sparky Starks) for the Atari 400/800 in 1981. It was released by Adventure International, Scott Adams' company, which also sold versions for other computers:

Rear Guard was the only TRS-80 game written by Wayne Westmoreland and Terry Gilman that was a “port” of an existing Adventure International game. 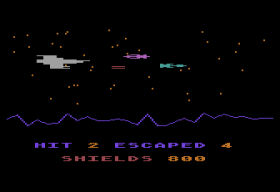 Rear Guard for the Atari 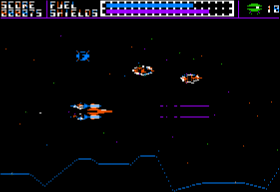 Rear Guard for the Apple II 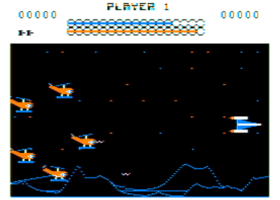 Rear Guard for the Color Computer

Waves of Cyborg ships are attempting to attack your fleet’s crew pods. If they penetrate your defenses, they’ll kamikaze your fleet. The enemy is relentless, your crew pods weaponless, your firepower endless. Are you made of the right stuff to successfully defend your fleet?! FIND OUT NOW!

Like many of the different versions of Adventure International games, the TRS-80 version of Rear Guard differs quite a bit from the Atari original. 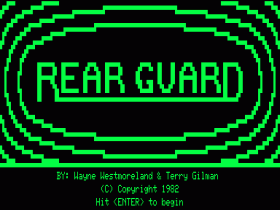 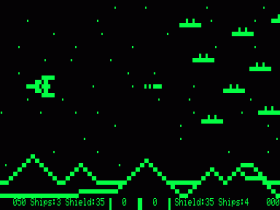 In the TRS-80 version, the player is a member of the “rear guard,” protecting the outskirts of the fleet. The player’s ship is positioned at the left side of the screen and is constantly moving over the landscape (the fleet is presumably to the left of the player). Alien ships approach from the right, intent on overtaking the player and attacking the fleet. The goal is to destroy those ships before they can move past the player.

An additional problem is that most of the alien ships shoot at the player. The only options are to maneuver to avoid the shots or to activate the shields to absorb them. Unfortunately, the shields have limited power and must be used sparingly. The game ends when either lives run out or if too many alien ships get past the player. 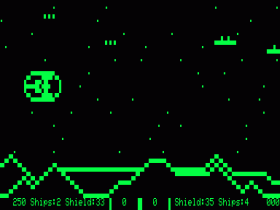 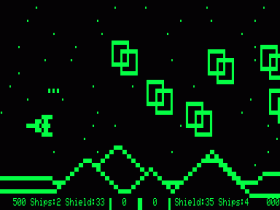 What makes Rear Guard especially interesting is the behavior of the aliens. Each new wave is different, with differing characteristics and behaviors. The advertisements promised “nearly two dozen types of enemy craft,” but I must admit I have never reached far enough in the game to confirm that number.

Rear Guard demonstrates the extremely smooth graphics common to the Wayne Westmoreland and Terry Gilman games (dubbed “Arcade Action Graphics®” by the advertisements). Because they created it for “business instead of fun,” Wayne Westmoreland described Rear Guard as their least favorite TRS-80 game. But I disagree with that assessment, and consider the TRS-80 version of Rear Guard to be one of my favorite games. 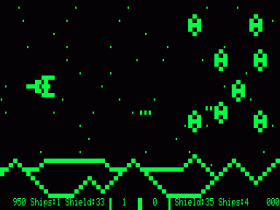 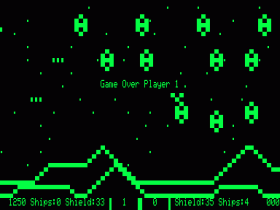 In 1995, Wayne Westmoreland released all of their TRS-80 games into the public domain. You can download Rear Guard and all of their other games here:

I’ve always regarded Rear Guard as a top-quality TRS-80 game. I never quite understood why Wayne disliked it so much!?!

Well, keep in mind that all the other games we came up with on our own. Rear Guard was a port from someone else’s idea. It didn’t make it bad, it just made it less interesting to do.

My favorite was Armored Patrol (Tank Zone 2000). I swear, we spent hours on end getting that tank so that it would spin perfectly at high speed. Of course, during actual game play, it spins so slowly you can’t really tell.