The Radio Shack Speaker-Amplifier (catalog number 277-1008) was a small 9-volt battery-powered speaker with volume control that had many different uses. In the TRS-80 world, it was the recommended1 way to hear sound in TRS-80 Model I/III/4 games. The Speaker-Amplifier (or Amplifier-Speaker) was sold for almost 50 years, from 1968 to 2017. It cost $6.95 in 1968 and that price increased to $11.99 by the time it was discontinued. Although it always used the same model number, there were many different designs and different names over the years:

Although the Radio Shack Speaker-Amplifier was powered by a 9-volt battery, the later designs could also be powered by a DC adapter.

Like many computers at the time, the TRS-80 Model I could save and load programs to cassettes. The saving process used sound hardware to create a series of sound signals that were sent to the cassette recorder. TRS-80 programmers soon figured out that the same hardware could be used to make electronic music and game sounds. (The TRS-80 Model I had very similar sound capabilities to the Apple II.) 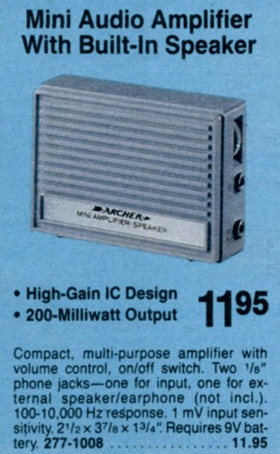 The Archer Mini-Amplifier-Speaker from a 1984 Radio Shack catalog

Soon, most TRS-80 games featured sound effects played through the cassette port. One way to hear game sound was to use a cassette recorder as a speaker and amplifier. (Using an AM radio near the TRS-80 wasn’t a very good option.2)

Here is the description from the manual for the 1980 game Cosmic Fighter from Big Five Software about how to play game sound through the cassette recorder:

This game contains programming which produces sound effects that leave the computer through the AUX plug in the cassette cable. To hear the sound follow these instructions: First, load in the game. Remove the tape from the recorder if you loaded the game from cassette. Insert the large grey plug on the cassette cable into the AUX jack on the recorder. Insert an earphone into the jack labeled EAR on the recorder. Pop open the cassette door on the top of the recorder and reach in and hold in the interlock switch that is located in the left rear corner. Now press Record & Play together and then release the interlock switch. Sound should now come through the earphone.

Using the interlock switch trick on a cassette recorder worked, but a more convenient way to hear game sound was using an external speaker. This was also described in the Cosmic Fighter manual:

A better method for hearing the sound is to connect the AUX plug on the cassette cable to an amplifier, such as Radio Shack’s mini amplifier, part# 277-1008. This will allow more people to hear the sound while a game is being played.

The RadioShack Mini Amplifier-Speaker from a 2000 Radio Shack catalog

Some of the more technically advanced TRS-80 users installed a speaker inside their TRS-80 case. There were many articles in computer magazines describing exactly how to do this. Some people even installed a switch to route game sound to their newly installed speaker or to send it to the cassette for when they wanted to save programs.

But the best choice for most users was the Radio Shack Speaker-Amplifier and most games recommended it. Here is another recommendation from the Dancing Demon (catalog number 26-1911) manual:

In order to use this program, you must be able to hear the music to which the Demon dances. Connect the jack (normally connected to the AUX Input on the cassette tape recorder) to a High Fidelity system, or a small speaker-amplifier (such as the Realistic Cat. No. 277-1008)

Here is another from the manual for Android Nim from 80-U.S. Software:

This unique animated graphics game has SOUND. Simply plug the cord which now goes into the AUX of your cassette recorder into any audio amplifier. (Radio Shack Microsonic 200 mw Solid State Speaker-Amplifier Cat #277-1008 works well, as do many others.)

Radio Shack discontinued the Speaker-Amplifier in 2017. Unfortunately, there is no product being sold today that is quite as convenient for adding an external speaker to the TRS-80.