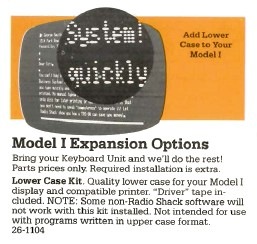 The inability to display lower case characters was a well known deficiency of the TRS-80 Model I. A number of modifications were developed to address that limitation, with the most popular being the Electric Pencil lowercase modification. But the Radio Shack Lower Case Kit (catalog number 26-1104) was Radio Shack’s official solution for adding lower case to the Model I.

Introduced in late 1979 at around the same time as the Scripsit word processor, the price for the Radio Shack Lower Case Kit started out at $99.99 (plus installation) but was soon lowered to $59.95. Despite the use of the name “kit,” Radio Shack required installation by a Radio Shack technician.

The Radio Shack kit included an updated character generator to improve the look of the lower case characters. It also used a slightly different approach than the Electric Pencil modification. Instead of requiring a switch to enable and disable lowercase, lowercase was enabled all the time. This created the potential for conflicts but there were only a handful of incompatible programs, most notably two from Radio Shack: Level II Cassette Payroll and Accounts Receivable. Radio Shack provided updated versions of those programs to affected customers free of charge.

Even though the Radio Shack kit allowed lower case characters to be displayed on screen, the Model I ROM provided no consistent way to type them using the keyboard. Some programs, such as Scripsit, contained their own keyboard driver, but using lower case in Level II BASIC required a separate lower case driver. The kit came with a lower case driver on tape that loaded into high memory and enhanced the ROM keyboard driver to support lower case. Pressing SHIFT+**** toggled the upper/lower case state (there was no shifted 0 character on the TRS-80 keyboard). This key combination to switch case became the TRS-80 standard. Eventually, most Model I disk operating systems automatically installed their own lower case drivers without requiring a separate driver.

The TRS-80 Model III, introduced not much later in August 1980, offered lower case as a standard feature. It had a lower case keyboard driver in ROM that toggled case with SHIFT+0, just like the Model I kit. Due to new FCC rules, Radio Shack discontinued the Model I in the United States on January 1, 1981. However, Radio Shack continued to sell the Model I overseas until at least 1982. As part of a video circuit revision in late 1981, the hardware of the Radio Shack Lower Case Kit was folded into the Model I motherboard. Although Radio Shack never publicized the fact, this meant that the final Model I’s sold required only a standard driver to enable lowercase.

The lack of lowercase on the Model I actually was a non-issue for me… even today, it makes using that particular PC and absolute ‘early days’ experience – I welcomed the Model III’s enhanced capabilities though. The one computer where I missed true lowercase display was the stock CoCo – the inverted characters representing lowercase were a bit hard to look at; the lack stimulated the natural way to go in that regard -> graphics screen :-)

I went the cheaper route with my TRS-80 — I cut a couple traces on the main board, piggybacked a second DRAM on the video ram chip (I remember soldering those legs…) and wiring to a switch above the expansion interface connecter. The stock character generator had lowercase in it (no descenders) just not enough ram for the extra bit.

I bought my TRS-80 Model I, Level I, 4K in 1977 from summer job money while I was still in High School. I couldn’t afford any of the official Radio shack mods. I think the only one I bought was Level II BASIC. I did my own lower case mod before that Radio Shack ever came out, much like MaxEdison. In order to actually use it, I had to write my own driver in Assembler using Microsoft Assembler on tape, as I didn’t have a disk drive. My driver also had a keyboard de-bounce routine in it, as many of you may remember, this was a real problem with the Model I keyboard. I had to load it from tape every time I booted up my computer.

Later, I also installed my own 16K RAM upgrade. My final upgrade was an over-clocking mod which was toggled by sending a 1 or 0 to one of the output ports. (I think it was 127, but that was over 30 years ago.)

This was my very 1st soldering job I did. Now I can solder very good. I remember taking my TRS-80 level 2 model 1 to a persons house. I guess found on a BBS. He showed me how to do it. Now I know it was a 1 bit wide chip I solder on the other chip. I forgot how I did cut a trace and remember saying to him don’t want to mess up my TRS-80.

But then the letters were not right some lifted up some. Found out I did not have the right character ROM chip. Had to order it from Radio Shack in TX for like $45.

Good thing I had a photo of a high score screen in Super nova had the TRS-80 on about a week. Can see in the photo the comma was tip was lower under the other letters so I know I did have the lower case chip.

Remember how when my TRS-80 did not work any more I took it to a Level 5 place to fix it. It cost over a $100 I think and they had it over a month and I remember calling them a lot asking when they be done that’s how much I liked it. They replace the RAM chips and must of stoled the Lower case letter set chip and put it in some one else’s. That was before I did the lower case mode on it.

Love the lower case I had after that.