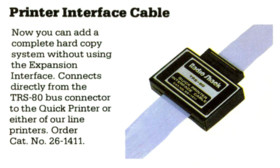 The Printer Interface Cable, introduced by Radio Shack in 1979, was a special cable that allowed a cassette-based Model I to be connected directly to a printer. Each Printer Interface Cable was six feet long and attached between a printer and the bus connector of the Model I. No Expansion Interface was required (and in fact, it wouldn’t work with one).

There were two versions of the Printer Interface Cable. They differed only in the printer connector used:

In comparison, the equivalent printer cables which connected directly to the Expansion interface were less expensive:

The Model I was followed by the Model III in 1980 and Model 4 in 1983. Both of those computers included a printer port in all their configurations, even the cassette version.