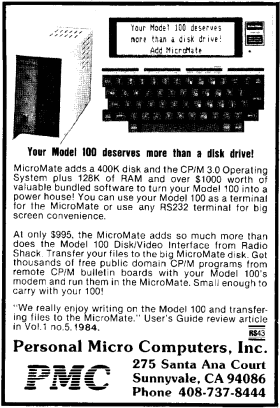 MicroMate advertisement from the July 1985 issue of Portable 100 magazine

The PMC MicroMate was a CP/M workstation introduced in April 1983 for the price of $1195.00, although that price was later reduced. It was sold by Personal Micro Computers, Inc, also known as PMC, already well known for the Model I compatible PMC-80 and PMC-81 computers. Although the computer lines were not really equivalent, the MicroMate replaced both the PMC-80 and PMC-81. The MicroMate was manufactured by PMC but also resold by TRIOS Micro Systems until late 1984 and was sometimes relabeled by them.

The MicroMate, officially known as the PMC-101, featured a Z80A processor with 128K of memory and an integrated 5 1/4" floppy drive. The whole computer fit in a case the size of an external drive enclosure. In fact, the unit resembled the external drive units used on a TRS-80 Model I. The MicroMate had no keyboard or video display but was billed as a “Terminal Expander,” designed to be used with any terminal to run CP/M programs. In addition to CP/M 3.0, the MicroMate also came with the T/Maker integrated software package.

According to a 1984 interview with company president Ron Troxell, the MicroMate was primarily targeted at the government and corporate markets. But in 1985, PMC began advertising the MicroMate as an add-on for the Radio Shack’s TRS-80 Model 100 portable computer. The MicroMate, while not much larger than the Model 100 itself, offered both a means of disk storage and the ability to run CP/M programs. In addition to being a storage option for the Model 100, competing with such products as the Radio Shack Disk/Video interface or the Holmes PMD-100, the MicroMate was also one of the few ways to run CP/M programs on the Model 100.