Plug ‘n Power was Radio Shack’s brand name for products that used the X10 power line communications protocol. X101 was developed in 1975 by Pico Electronics, Ltd. of Glenrothes, Scotland. Radio Shack, along with Sears, Roebuck & Co. (with the Sears Home Control System) and BSR (with the BSR System X-10), was among the first sellers of X10 compatible products.

Radio Shack introduced their first Plug ‘n Power products in late 19792. Most of the products were appliance and light modules. These plugged into an electrical outlet, and an appliance or light was then plugged into the module. Some of those modules included: 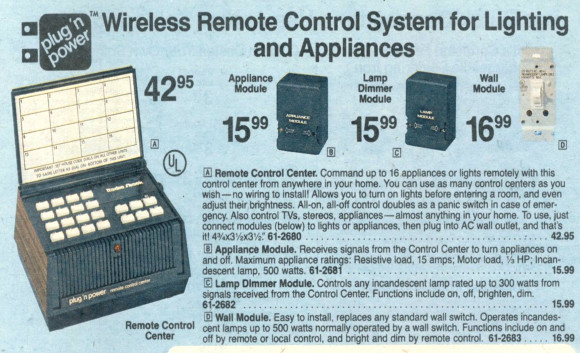 As an example, you could plug a television into an Appliance Module and a lamp into a Lamp Dimmer Module. You could then plug in a Remote Control Center anywhere in the house and use the buttons to turn the television on or off and adjust the lamp brightness. 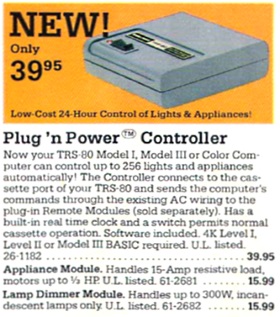 From a 1981 Radio Shack Computer catalog:

Control up to 256 lights and appliances with your TRS-80 Model I, III, or Color Computer. Activate security lights, start dinner, turn on the radio and much more — all from one central location! Nothing to install — just plug appliances into modules, and then into AC outlet and you’re all set.

One nice feature of the Plug ‘n Power Controller was a port to plug in a cassette recorder, coupled with a switch on the top of the unit with two settings: “CTRL” and “CASS”. Changing the switch to “CASS” allowed the TRS-80 to read from the cassette recorder normally. Changing the switch to “CTRL” allowed the TRS-80 to control the Plug ‘n Power devices.

Software for the Plug ‘n Power Controller came on two cassettes, with versions for the Model I, Model III, and Color Computer. There were also program listings in the 36-page manual.

The disadvantage of the Plug ‘n Power Controller was that the TRS-80 had to be turned on and running the appropriate software to control the Plug ‘n Power devices. This meant that a complete home automation system needed to have a TRS-80 permanently devoted to it.

In 1983, Radio Shack reduced the price of the Plug ‘n Power Controller to $19.95. It remained at that price until it sold out. 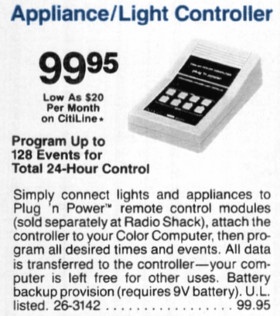 Since I worked while in high school, all of my income was disposable and went to Radio Shack. I bought a pair of these modules to play with and hooked up the controller to my Model III. My first challenge was to install them onto our living room lights without my parents knowing. I waited until Dad came home from work. While in my room at the computer, I started to cycle the lights off and on. It didn’t take him long to figure it out, but we still had a good laugh.

I found this article while looking how to control my appliance/light controller with a custom-made cable and vba code. I still have my first computer (color computer II) and plugged it in on 11/30/16 programmed my appliance modules to cycle my christmas lights. Still looking for a way to send commands from my pc via rs-232.

very interesting , thank you. I wish I could still purchase some switch-modules. There is lots of receptacle remote controls for sale, but the switch ones are more practical. I use them for the Cottage to Boathouse Appliances.