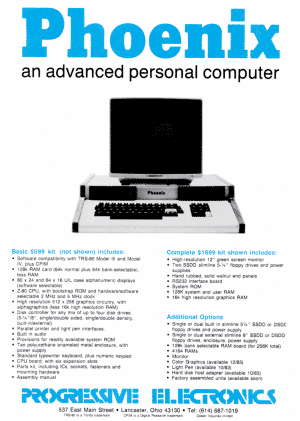 Progressive Electronics advertisement from the December 1983 issue of 80 Micro

The Phoenix was offered in two configurations. The first was the “Basic kit” which cost $599.00 and included:

The second configuration was the “Complete kit” which cost $1,699.00 and added:

Progressive Electronics also offered a number of options for the Phoenix. Some of the more interesting sounding options included:

Those are respectable feature lists for a computer at the time, especially considering the price.

But how compatible was the Phoenix with the TRS-80? Steve Poling, one of the first purchasers of the Phoenix, described it as completely compatible. He stated that it “ran EVERY piece of TRS-80 software you could find” and “was the most compatible clone I ever owned… TRSDOS/LDOS/CP/M… whatever you wanted to run for an operating system.” He also described it as “quite a feat of engineering for the time” saying his system “ran flawlessly for over five years” until he sold it.

Progressive Electronics continued to advertise the Phoenix until early 1984.

Interesting. This is a clone I had not heard of.

Did you ever have one of those twilight zone moments? You know where something happens that is just so weird and unbelievable? Well, this is one of those moments. Why do I say that you ask? Well…..

First thing to bear in mind is this is the ONLY reference to the Phoenix that I have seen on ANY TRS-80 site over the years. OK, not to weird, but here it comes.

I am not sure where Mathew got the above clip from, but I was stationed with Steve Poling in Nebraska in the late 80’s where he sold his Phoenix to a friend of mine, Doug Wolters, who in turn sold me the very unit that Steve is referencing.

I had it for many years and it eventually got ruined in a flood at my apartment. As mentioned in the article it ran all model III / 4 software without issue as well as many versions of CP/M. As part of Steve’s sale, there was a ton of software that came with the unit of different flavors, as well as my own monster collection I already had.

This was a very solidly built unit, it had the hand rub sides so it must have been the extended kit or factory assembled version, 128K, 2 DSDD HH drives. The interesting thing about it was that it actually had card edge connectors in it where the floppy controller and memory cards were. There was room for more cards, but I didn’t have any of the others.

The only real problem I had with is was the connectors were not of great quality and had connection issues with the cards. I eventually replaced the connectors with some good AMP ones and that solved the problems.

Always cool to learn about TRS-80 clones that I was never aware of! Thanks!

And Ken, I still check all the Coco auctions on eBay to see if my unit, which was modified and then given away by my father, ever appears! I suspect it became landfill many years ago though…

Very interesting to come across this after all these years. I was the electronics designer of the Phoenix and other later computers at Progressive Electronics. Keith Helwig started out making digital dashboards for hot-rods and later hired me to do some design work and help with service/repairs for some Model 1 expansion kits. He also hired my long-time friend Ed O’Neal to write software, and as a team we developed the Phoenix. We managed to get the Phoenix reviewed in several magazines including Computer Shopper which featured the Phoenix on the cover. While they gave us a very nice review, this came out soon after the IBM PC was released and the Phoenix quickly became obsolete.

Wow… I never thought when I provided the information about the Phoenix that I would find a comment from Ken… Ken, I remember you too…. and Doug Wolters… Talked to Doug Wolters some years back but had no idea that he had sold the system to you Ken… Darrell Tuttle, I remember you… I was the student of James Cowles, that slipped into town from time to time. Kieth Helwig is sorely missed, he passed on a few years back. Many fond memories of this system and great times with all you early pioneers…

I build two, including soldering the circuit boards. They were solid computers.

An interesting side note, what better OS to run on the clone, but a close OS. I don’t recall the name of the OS, but I remember looking at the code. The publisher had several women’s names and phone numbers, leading me to suspect it was his little black book.