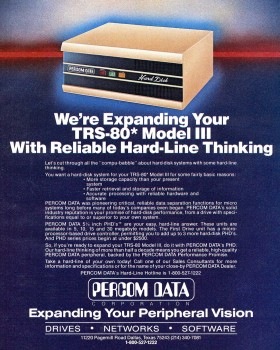 Percom advertisement from the December 1982 issue of 80 Micro

The Percom PHD was a line of 5 1/4" Winchester hard drives sold by Percom Data for the TRS-80 Model III, as well as several other computers. Introduced by Percom in 1982, the PHD used what was described as a “smart microprocessor-based drive controller” to allow up to four PHD drives to be connected to the Model III at one time. The Model III version also worked with the Model 4, but Percom never sold a version for the Model I.

The PHD drives were available in 5, 10, 15, and 30 megabyte sizes. The model numbers corresponded to the drive capacity: the PHD-10 was a ten megabyte drive. The prices started at $2,495.00 and increased with drive size.

(It is unclear what PHD stood for, but it doesn’t appear to have been the obvious “Percom Hard Drive.” The product introduction only stated that the system was “dubbed the PHD because of its smart controller.")

Percom had a long history with the TRS-80, dating back almost as far as the Model I itself. They offered a wide variety of TRS-80 products, most notably their revolutionary Percom Doubler. But the death of Harold Mauch, company founder and president, in 1982 marked the end of new TRS-80 products. Percom continued to advertise the TRS-80 version of the PHD hard drive into 1983, but it was the final Percom product for the TRS-80.