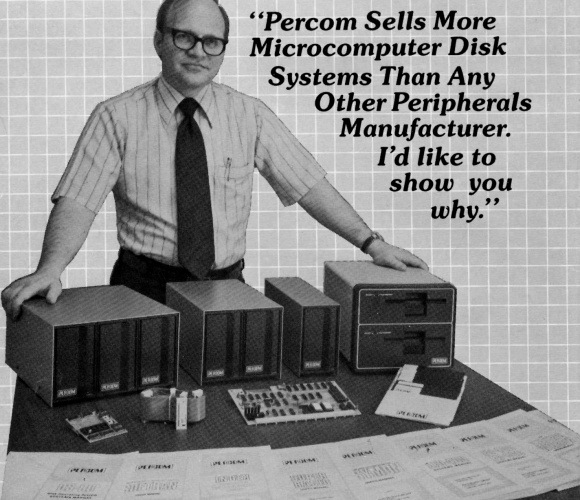 Harold Mauch from a 1980 Percom Data advertisement in 80-U.S. Journal

Percom had its origins in a symposium sponsored by BYTE magazine in November 1975. That event, held in Kansas City, Missouri, was about the “interchange of data on inexpensive consumer quality audio cassette drives.” The eighteen attendees (including Bill Gates) created a cassette storage format that became known as the “Kansas City Standard.” The final standard, published in the February 1976 issue of BYTE, was written by Lee Felsenstein and Harold Mauch. Harold Mauch also wrote an article, “Digital Data on Cassette Recorders” that was published in the March 1976 issue of BYTE.

Around this time, Harold Mauch created the CIS-30, a cassette tape interface for the SWTPC 6800 that used the Kansas City Standard. He and his wife Lucy started Percom Data (originally known as PerCom Data) in March 1976 to sell the CIS-30 and other products. The company rapidly expanded and soon began adding employees. It incorporated as Percom Data Corporation in 1978.

In 1979, Percom expanded into the TRS-80 market with the Percom Separator. The Separator corrected an important defect in the Radio Shack Expansion Interface. In 1980, Percom introduced the Percom Doubler, designed by Wayne Smith and Harold Mauch with software by Jim Stutsman. The Percom Doubler was the first product to add double-density to the Model I. It defined the market for TRS-80 doublers and created a hardware standard followed by later doublers.

Other notable Percom products for the TRS-80 included:

In October 1981, Percom Data moved from Garland, Texas to a larger space in Dallas. They continued to expand their product line and introduced products for many computers. A look through a Percom catalog reveals a wide range of interesting products. Some of them included:

The Percom PHD, introduced in 1982, was a hard drive system for the TRS-80 and several other computers. It was the final Percom product for the TRS-80. The sudden death of Harold Mauch in August 1982 drastically changed the focus of the company. Lucy Mauch left Percom less than a year later.

Although it continued to sell products for the Atari and TI 99/4A, Percom began to move from the home computer market to the business market. One of its new products, PerComNet, a local area networking board, was licensed by Western Digital under the name PC-LAN.

In 1984, Esprit Systems, a manufacturer of video display terminals, announced an “agreement in principle” to purchase Percom. Anthony Palladino, the president of Esprit Systems, stated:

The acquisition of Percom will expand and strengthen Esprit’s product lines and worldwide sales of video display terminals, and also provide Esprit with an entry into the rapidly growing local area network market.

Percom appears to have been folded into Esprit Systems and the Percom Data trademark was cancelled in 1990.

Wonderful memories. My first job in electronics.I was the practial joker,still am.I was the tech that rode the chopper motorcycle.Percom was like one big family,miss those days.I am an electrician in florida since those days. R.Gehm