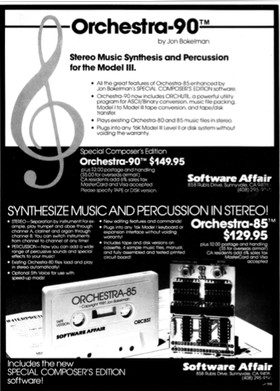 Orchestra-90 advertisement from the February 1982 issue of 80 Microcomputing

Both models came with Jon Bokelman’s “Special Composer’s Edition” software. It could synthesize four voices (instead of three), plus an optional fifth voice on computers with a speed-up modification. In addition to Orchestra-80’s four instruments (clarinet, oboe, pipe organ, and trumpet), the new software added a violin and a percussion effect. 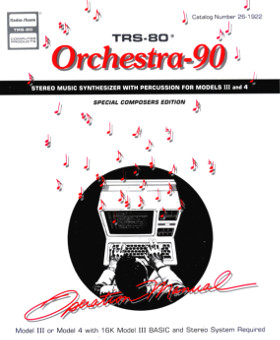 Cover of the Orchestra-90 manual

Radio Shack introduced their licensed version of Orchestra-90 (catalog number 26-1922) in 1984. It cost $79.95, but was otherwise identical to the model Software Affair had sold directly. Here is a description from a Radio Shack catalog:

Create highly sophisticated electronic music and sound effects. Both musicians and non-musicians can compose in six octave ranges in up to five voices. Transcribe sheet music.

According to Bryan Eggers, Radio Shack had approved plans for Orchestra-1000, a “16-voice stereo PC music synthesizer with MIDI” for their MS-DOS compatible Tandy 1000 computers. Unfortunately, that project was never developed. 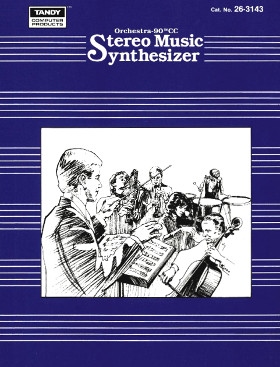 Cover of the Orchestra-90 for the Color Computer manual

The Orchestra-90 CC contained “The William Tell Overture” by Gioachino Rossini for its demonstration music.

Software Affair sold two volumes of a Orchestra-85/90 classical music collection called Greatest Hits. Volume I and II cost $10.00 individually on cassette, or both volumes together cost $20.00 on disk. The two collections featured 22 pieces of classical music (in stereo), including

Orchestra-90 made its final appearance in a Radio Shack catalog in 1987. Orchestra-90 units became very difficult to find after that. However, there was still interest in Orchestra-90, and song files were still widely available on BBS’s and through public domain disk services.