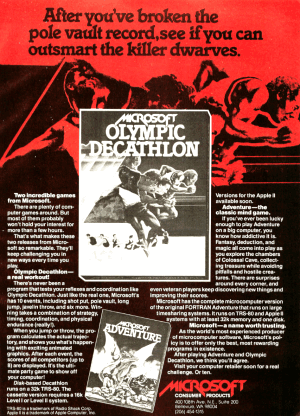 Olympic Decathlon advertisement from the October 1980 issue of BYTE

Olympic Decathlon, sometimes known as Microsoft Olympic Decathlon, was one of the first sports related programs to mix game and simulation. It was written by Timothy W. Smith and sold by Microsoft Consumer Products. The original TRS-80 version cost $24.95 and was released in 1980. It was followed by an Apple II version in 1981 and an IBM PC version in 1982. Although the program used both the word “Olympic” in its title and the Olympic rings symbol, the program manual makes no mention of a license from the International Olympic Committee. The lack of a license might be why the 1982 IBM PC version was renamed Microsoft Decathlon and all references to the Olympics were removed.

Contrary to what is sometimes claimed, Olympic Decathlon was not based on the similar Konami arcade game Track and Field, but actually predated it by several years. Olympic Decathlon was created by Timothy Smith, a former systems programmer for Burroughs Corporation. Smith wanted to write a sports game, but didn’t want to pick an obvious sport such as baseball or basketball. Instead, he chose to base a game on the decathlon, a grueling competition that consists of ten track-and-field events:

He spent nine months researching the history of the decathalon, studying the physics of the individual events, and programming a TRS-80 representation. The result is a remarkable game, with graphics generally regarded as among the best ever created for the TRS-80. Olympic Decathlon won the award from Creative Computing for the best game of 1981. 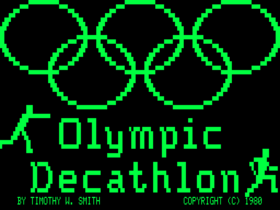 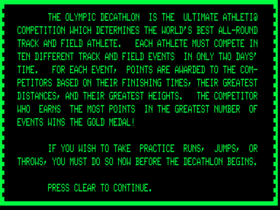 The TRS-80 version of Olympic Decathlon was available in both cassette and disk versions. The program disk could only be copied once, but Microsoft would replace a damaged disk for $7.50. One nice feature of the cassette version was that the same cassette would load under both Level I and Level II, a trick that only a few games managed. As appropriate for such a detailed game, the program came with a 50-page manual.

After a very animated title screen, the player can choose either to compete in the decathlon (playing all events consecutively) or to practice each individual event. I suspect that most people used the practice mode to play the events they preferred. In the decathlon mode, up to eight players can compete against each other. 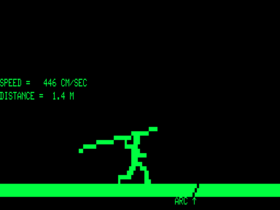 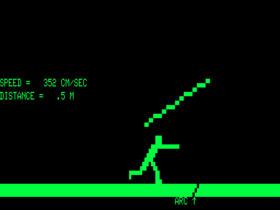 The running events involve pressing the 1 key to control the left leg and the 2 key to control the right leg. These keys need to be pressed alternately to run, resulting in a real keyboard workout. Some parents banned their children from playing these events for fear of the safety of their computer keyboard! 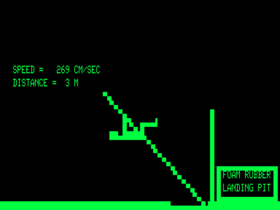 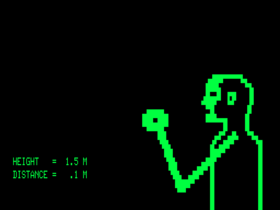 Although the Apple II and IBM PC versions were more famous, the TRS-80 version of Olympic Decathlon remains a fun game to play.

Awesome. I have the Apple II version, but never saw the TRS-80 version, which is obviously super rare. For what they had to work with, the TRS-80 version looks fantastic. It’s unfortunate this game doesn’t get more historical due. I’ve tried to call out several “history” articles of late that for whatever reason pegged Konami’s Track & Field as first…

Great article. I had the TRS-80 version and I had to laugh about parents banning the running events. That’s exactly what my dad did. He wanted his keyboard to last a while, I guess. I became real good at the pole vault and javelin throw. I tried the IBM-PC version years later but it didn’t have the charm for me that the TRS-80 version did.

I too played this game quite a bit, and must have been very impressed with its execution as to this day I have absolutely zero interest in sports simulations. Every time I hear the decathlon mentioned (IRL) it reminds me of this game! These screenshots really bring back memories – the shot-put was a classic! The javelin and the long jump would’ve been my favourite events. And yes, the pole vault was maddeningly difficult!

I remember being so impressed with the animation I “ripped” the animated runner from the title screen into my own code, with the intention of making some game based around it. Alas it never progressed further than animating the lone runner on the screen… I possibly had keyboard input but couldn’t be sure!?!

There is an interesting glitch in this game that I only recently discovered. In the high jump event, after you press [SPACEBAR] to start running wait for the athlete to appear on the left side of the screen. As soon as the athlete appears press [DOWN] followed immediately with [ENTER]. The athlete will proceed to jump backwards off the left side of the screen which results in a GOOD JUMP!

You can do this over and over as the bar gets higher and higher until the bar gets to 270cm. For some odd reason at this point pole vault box appears in front of the bar and your running speed increases from 620 CM/SEC to 56276 CM/SEC. Your distance goes haywire and your athlete never appears on the screen and it says YOU DIDN’T JUMP! after a few seconds. It will do this until you exhaust your three attempts to clear the bar and you will end up with a score of 1290 for the event.

One one my first “big game”, on my first machine, TRS80 K7. I remember how long was the loading ;-) but mostly how extraordinary was the realism, especially for the 110m hurdles :-))) With such a processor, and despite the poor resolution, i played it for yours and never been tired of it!