Nukliex was written in 1984 by Dennis Lo, and released through JMG Software International. Although the game’s title screen identifies itself as “Nukliex,” it was always advertised as “Nucliex.” 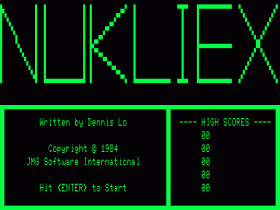 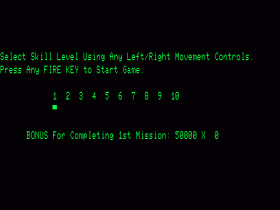 The action takes place against a backdrop of slowly moving stars. A wave of asteroids bounce around the screen, threatening your ship with destruction. You need to avoid the asteroids and destroy them. Periodically, an alien will appear among the asteroids and try to shoot you. Once you destroy all of the asteroids and aliens, a new wave appears. Subsequent waves are sometimes all asteroids or sometimes just different types of aliens. The different types of aliens behave differently from each other, which is one of the interesting parts of the game. Some aliens attack you directly, some try to sneak up behind you, and some ignore you. Your goal is always to destroy all of the aliens and asteroids in a wave. 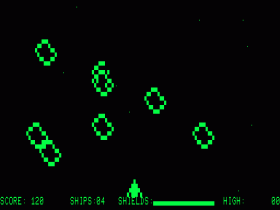 A wave of asteroids 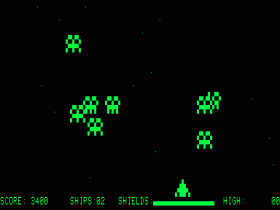 A wave of aliens 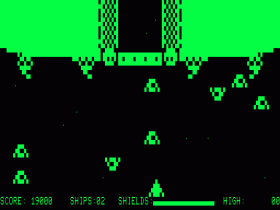 Part one of final stage 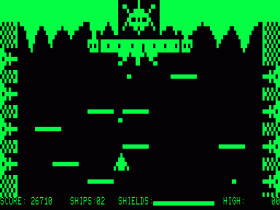 The second part of the stage is filled with small pieces that are moving constantly from side to side. There are more guns firing from the top of the screen. You need to get past the pieces, destroy the guns, and destroy the machine protected by the barriers at the top of the screen. After this, the level ends and you start over at the beginning, but with a higher difficulty level.

The sound in Nukliex is sparse but appropriate. The opening title animation screen is impressive. Nukliex makes good use of the keyboard controls and also supports a joystick. I have a special fondness for Nukliex because I played it extensively while I was testing my first TRS-80 emulator. Though not as famous as many of the other TRS-80 games, Nukliex is one of my favorites.

Huh … Wonder why I don’t remember the Nukliex / Nucliex spelling difference? When I saw it in the side menu here I thought you mis-spelled it….. huh, very strange.

We didn’t sell many of these unfortunately, I don’t even recall how much we were able to pay Dennis Lo in royalties, but it wasn’t much… which is a pity, because it was a very good game.

I read about Nukliex here first. I had never heard of it before but it is one of the best TRS-80 games. Too bad it didn’t sell more copies. Robot Attack and Nukliex are my favorites.