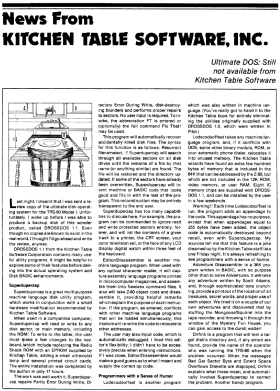 One of the most popular columns in the TRS-80 magazine 80 Microcomputing wasn’t about the TRS-80 at all. In fact, despite appearing to be a news column, it wasn’t about real products or companies. It was “News From Kitchen Table Software, Inc.”, a very amusing humor column introduced by David Busch in the July 1981 issue.

I thought, what if there was a company with the imagination of a Scott Adams, Nolan Bushnell, or Bill Gates, but had Tandy’s management structure? That was Kitchen Table. Now I can scarcely look at a new product without thinking how KTI would mishandle it.

The first product from Kitchen Table was DROSSDOS, an enhanced clone of Model I TRSDOS. Like most Kitchen Table products, DROSSDOS was “downward compatible” with the TRS-80 original, but provided extra utilities and features. These extras included DIRFINK, “a program that will test a target disk’s directory and, if any errors are found, provide the name of the operator who was running the TRS-80 when the problem occurred,” SUPERDUPERZAP, and MIDLECASE/DVR, a driver for those who didn’t like either lowercase or uppercase.

DROSSDOS contained all the same commands as TRSDOS, but not all did the same thing. As Busch explained, the KILL command in DROSSDOS “causes the computer to energize the keyboard with 110 volts.”

Although Kitchen Table sold fewer than 300 copies of DROSSDOS, the company still made over $3 million by selling patches to its over 100,000 users. To help with this unusual business model, the DROSSDOS documentation contained 4,000 deliberate errors. DROSSDOS was later upgraded to DROSSDOS/8E, the source code of which Busch published in the January 1983 issue of 80 Micro.

Magazines typically stipulate advertisers must send in copy for ads three months prior to an issue’s cover date. So far, no Kitchen Table product has remained on the market that long.

The company has developed a workable solution to this problem, however. Ads are now being written for products that don’t exist. Once the copy has been sent for publication, KTI will commission a programmer or designer to actually develop the product. This allows considerable freedom to the advertising copywriter, who must also possess some rudimentary knowledge of what computers can and cannot do.

In September 1981, Kitchen Table introduced their signature product, a TRS-80 compatible computer named the TLS-8E. The TLS-8E didn’t require a direct connection to a monitor: the unshielded RF modulator broadcast to any monitor or TV within 300 feet. It featured some other unusual design decisions, as described by Busch:

A KTI spokesperson explained that the TLS-8E makes extensive use of hard-wiring in place of the less expensive (cheaper) printed circuitry. In a similar vein, more than a dozen IC’s have been replaced by the equivalent transistors and other solid-state components, totaling in the thousands. Those integrated circuits that were used, such as the Z-79A microprocessor, have been solidly soldered onto their connective wires to keep the computer working reliably, even through the estimated 1200 degree temperatures that develop inside the keyboard when the computer is left on for more than 30 minutes.

The TLS-8E was also available as an easy-to-assemble kit, dubbed the Home Assembly Construction Kit (HACKIT). According to Busch:

Other useful gadgets to have on hand during assembly include a signal tracer, audio oscillator, digital multimeter, 30 MHz frequency counter, RF oscillator with 320 KHz to 220 MHz range, graphic equalizer, and SWR meter.

Kitchen Table later produced a portable version of the TLS-8E:

KTI has also introduced a miniature programmable device, dubbed the TLS-8E Pockets Computer. The Federal Trade Commission has reportedly insisted on the plural designation because KTI could not find a single pocket which could hold computer, cassette interface, tape recorder, and printer all at once.

Although Kitchen Table held numerous press conferences to announce their products, they were sparsely attended:

At the last KIT press conference, several journalists suffered radiation burns when a TLS-8E color monitor converted itself into an X-ray machine without warning.

Kitchen Table later branched out into services, such as a nationwide computer network called Hollerith Asynchronous Realtime Executive Network (Harenet). Harenet offered many cutting-edge programs, including Bocce Ball and High Stakes Hangman. In his review of the service, Busch said:

I also liked Time-Share Simulator, which simulates a session with a large, time-sharing computer. The user can simulate performing tasks on the big Harenet system. It’s quite realistic. In fact, KTI charges the user an additional $5 an hour to play this game.

In a few areas, Busch inadvertedly predicted future developments. For example, in 1982 Kitchen Table released the KTI-7500, a 7.5 GB hard drive which couldn’t be erased:

The key to the ultra-high density of the KHD-7500 is the low flying height—measuring in tenths of an angstrom—of its write head. This creates the problem of large air molecules being too big to squeeze between the head and the disk. Carbon monoxide (CO) is okay but carbon dioxide (CO2) can cause some horrible head crashes.

Kitchen Table’s solution to that problem is to create a near-perfect vacuum in the disk chamber. The disk “floats” on a tiny pad of Teflon II and is driven at 13,000 RPM by an electromagnetic field that “grips” the disk’s center but does not leak over to spoil the data.

This unique process has not been patented by KTI. Instead, each KHD-7500 is rigged to explode when dismantled or x-rayed. (Don’t take your computer through an airport security area!)

What is funny is how that design (minus the explosives, of course) resembles the workings of modern hard drives.

The final Kitchen Table column ran in November 1982. (For some reason, the title of the final two columns was changed to simply “Kitchen Table, Inc.") Busch wrote stand-alone articles about Kitchen Table for 80 Micro twice more: once in the January 1983 issue and finally in the May 1983 issue.

Fantastic story! I think the early micro crowd in general had a better sense of humor about the industry (and themselves) than we have today.

I just love the idea of a KLS-8E turning into an xray machine – without warning!