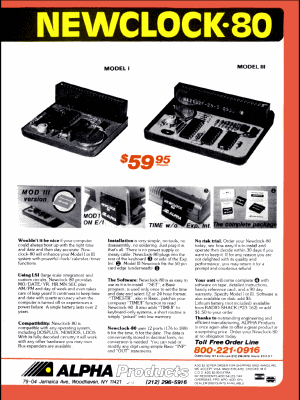 The Newclock-80 preserved the date and time, even when the computer was off. It featured a MSM5832 clock chip with a lithium battery backup which was said to last for two years. That battery, a CR2032, can still be purchased today. As an Alpha Products advertisement stated:

Wouldn’t it be nice if your computer could always boot up with the right time and date and then stay accurate? Newclock-80 will enhance your Model I or III systems with powerful clock/calendar/timer functions.

Both Model I TRSDOS Disk BASIC and Model III cassette BASIC contained a TIME$ command which displayed the time and date. But without a clock/calendar, that time tended to drift during disk access and it was lost whenever the computer was shut off.

The Newclock-80 boasted compatibility with all major TRS-80 operating systems. It came with a program that could set the clock and another that patched the BASIC TIME$ command to read the Newclock-80. Third-party programmers also wrote programs and patches which supported the Newclock-80.

The Newclock-80 and the TIMEDATE 80 were probably the most popular of the TRS-80 clock/calendars. They are even supported by several TRS-80 emulators, such as my own TRS32 and Tim Mann’s xtrs.