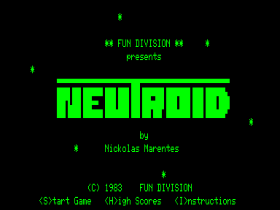 Neutroid was written by Nickolas Marentes in 1983 and sold through his company, Fun Division (known earlier as Supersoft Software). It was the third of seven games that he wrote for the TRS-80 Model I and Model III. Nickolas Marentes became better known for his later TRS-80 Color Computer games such as Donut Dilemma (which began with a Model I version) and Rupert Rythym. 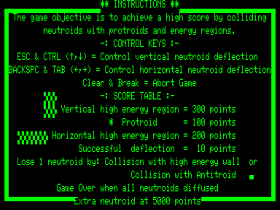 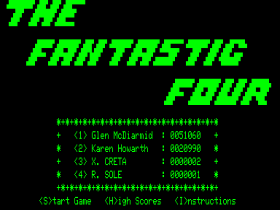 Here is the concept behind Neutroid:

In Neutroid, you are at the controls of a small atomic particle accelerator or synchrotron. In it, Protroid and Antitroid particles appear. Bonus energy regions, high energy walls and deflector rods exist. The aim? Control the movement of an atomic particle called a Neutroid within the synchrotron and neutralize all the orbiting Protroids before your Neutroid becomes energy saturated. Your Neutroid starts off slow and in a low energy state but as it gains energy, its speed increases till it finally reaches the high energy state where controlling it requires a high degree of rapid strategic thinking and lightning fast reflexes. 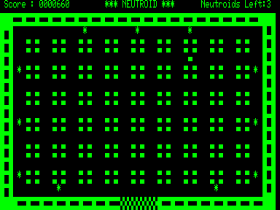 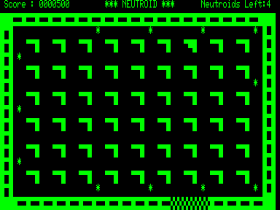 The trick is to bounce the Neutroid where you want it to go without hitting a wall. Hitting the wall with the Neutroid will result in the loss of one life. In later levels, you can also lose a life by colliding the Neutroid with an Antitroid, which looks like a Neutroid. 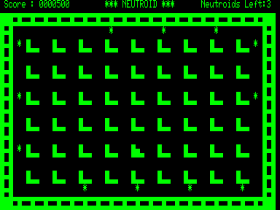 Deflectors activated in other direction 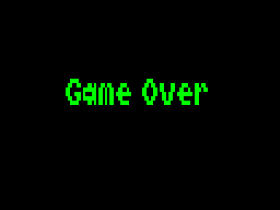 It takes a little while to get used to the keyboard controls. The important thing to remember is that using an arrow key to change the deflectors will end up moving the Neutroid in the direction of the key, but only if the Neutroid isn’t already moving in the opposite direction. In other words, you can only move the Neutroid at right angles; you can’t reverse it directly. For example, pressing the up arrow will cause the Neutroid to move up after it bounces off a deflector, but only if the Neutroid isn’t already moving down. If it was moving down then you would have to bounce it twice (first left, then up) to cause it to move up. 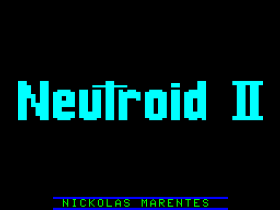 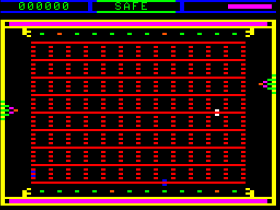 Because Nickolas Marentes lived in Australia, Neutroid never received distribution outside of that country. That is a shame because Neutroid is an excellent game that deserved wider release.

Neutroid is a treat for TRS-80 users: a professional quality game which they probably have never seen. You can read about his other games and download both Neutroid for the TRS–80 Model I/III and Neutroid II for the TRS-80 Color Computer from Nickolas Marentes' Project Archive site.

I never heard of Neutroid but I downloaded it now. Looks like great fun. It reminds me of Nukliex another game I had never heard of till I read about it here. Keep up the good work.

Good job with the review of Neutroid. I used to play Neutroid 2 on the Coco. I never knew about the original Model 1 version. Now I have a new TRS-80 game to try. Thanks for the pointer.

I know Nick personally – he lives in brisbane, about a 2 hour drive from me. We meet up whenever possible.

You might find of interest the fact he is now writing a new game for the Colour Computer 3 that showcases some amazing hardware stretching code – Amiga copper like effects. He is planning on releasing the game as a ROM cart which will include a Yamaha sound chip for the music soundtrack and effects.

Despite living in Australia, I’d never come across Neutroid back in the day, although in recent years after discovering Nick’s site I downloaded it to play, As Matthew mentions, another quality commercial release from Nick!

I’ve had the good fortune to have corresponded with Nick in recent times as well, most recently when he kindly gave permission (and assistance) in porting the Model 1 version of Donut Dilemma to another Australian-designed 8-bit micro, the Microbee. Donut Dilemma has long been coveted by Microbee users, who have an ever growing library of TRS-80 Model 1 ports due to the similarity of hardware.

Sadly Nick has recently announced the shelving of his above-mentioned Coco3 game for the foreseeable future. We can only hope that some day he finds it in himself to dust it off and complete it.

I am the Nick Marentes referred to here who created Neutroid, among others. I was a high school kid at the time with dreams of becoming the Bill Gates of the video game industry. Alas, reality has cought up with me and while the dream persists, the chances of it ever becoming true are distant. :)

The CoCo3 game mentioned is not canned, having reorganized my limited free time and am slowly progressing.