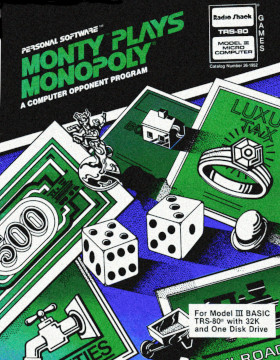 Cover of the Radio Shack version of Monty Plays Monopoly 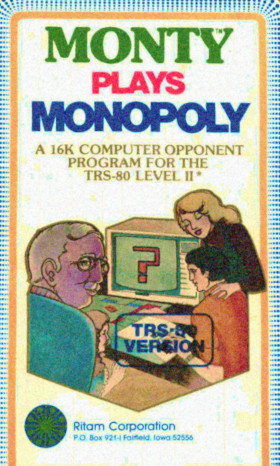 Cover of the Ritam version of Monty Plays Monopoly

Unlike later Monopoly programs, Monty Plays Monopoly wasn’t designed to replace the board game but to supplement it. In fact, it requires “the board and all the equipment that comes with the game”, according to the manual. Monty Plays Monopoly does roll computerized dice, but it doesn’t display the Monopoly board on screen2, keep track of other player’s properties, or even the amount of money each player has. It is up to the human players to move their own tokens on the physical board and act as their own bank, just as in an ordinary Monopoly game.

What Monty Plays Monopoly does provide is an additional player who is quite good at the game. As a 1980 review in SoftTalk put it: “You don’t play Monty – you play with him!”

MONTY provides a new dimension to your enjoyment of the game. You will come to know him as simply another player, a bright, entertaining guest who provides real excitement.

The Monopoly board game requires two players at a minimum, so Monty Plays Monopoly allows a single person to play a game by themselves, something not normally possible. 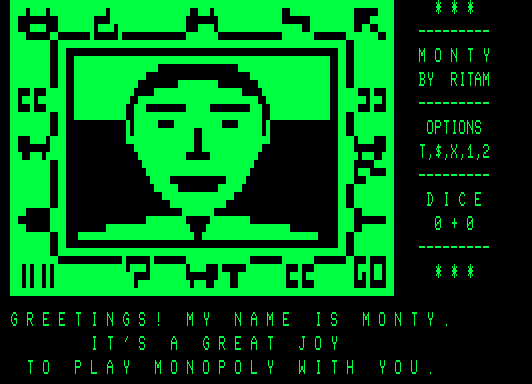 MONTY is not sponsored or endorsed by Parker Brothers, Inc.

Ritam Corporation had tried to obtain a license but Parker Brothers was surprisingly hostile to the idea of a computerized Monopoly game. Lacking a license, Ritam took a different approach, according to a 1983 article in Inc.:

The manner they devised was to have the machine act as a player of the game – not be the game itself. Hence “Monty Plays Monopoly” rather than, say, “Electronic Monopoly.”

According to that article, although Parker Brothers threatened Ritam Corporation with legal action, they never followed through with a lawsuit.3

Ritam Corporation’s next product was more successful: Monty Plays Scrabble, an adaptation of the Selchow and Righter game Scrabble. In addition to Apple II and TRS-80 versions, there were versions of the IBM PC and Commodore 64 and also as a handheld device. Unlike Parker Brothers, Selchow & Righter did allow Monty Plays Scrabble to be officially licensed.