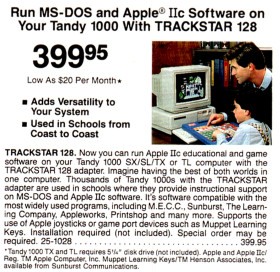 After Radio Shack introduced their MS-DOS compatible Model 1000 series, there were persistent rumors about a Model 4 emulation card that was being developed. Such a board would have been an clever way to help migrate Model 4 customers to the newer MS-DOS computers. Some people were even told at their Radio Shack stores that a Model 4 emulator would be released soon. But it never happened and no type of TRS-80 emulator was ever released by Radio Shack.

At the time, Radio Shack sold the Trackstar 128, an Apple IIc emulator card created by Diamond Computer Systems. The Trackstar used actual Apple II ROMs (licensed from Apple) along with custom hardware to achieve nearly 100% Apple compatibility. So the concept of a Model 4 emulation card certainly must have occurred to people at Radio Shack.

I’ve had three different people write to me (years apart) recalling details of a Model 4 emulation project that Radio Shack worked on but pulled at a very late stage. Their accounts match in almost all the details.

According to these people, the goal was compatibility with all of the Model 4 and Model III software sold by Radio Shack. The unnamed card was intended as an add-on for the Model 1000 and contained a Z80 CPU, floppy disk controller, video generation circuitry, and enough logic to process the memory and I/O. It used the Model 1000’s memory, keyboard, monitor, printer port, and floppy drives. It even supported the extra 64K of Model 4 banked memory.

Even though the goal was only compatibility with Radio Shack software, the card was able to run all software that was tried. One person recalled seeing a demonstration of Model III Sea Dragon and other self-booting TRS-80 games.

So did such a Model 4 emulation card ever exist? Is it possible that all three people were confusing it with another project?

At this late date, there is probably no way to ever know for sure.

I was one of those people who was told at my local Radio Shack store that the Mod 4 emulation card was coming soon. Every time I came in and asked about it the manager said it wouldn’t be long now. Then when another manager came in he had never heard of the idea and I never found out anything more about it. Even today I wish they had produced one of those cards. It would have been a very useful bridge between the TRSDOS and MSDOS worlds.

I remember wondering why they never did anything like that. I used a Trackstar board on an IBM PC at school and it worked great, and I just never could see why Tandy didn’t do something similar for the Model 4 or even the Model 1. I mean, they owned the ROMs, they knew all the technical details, it wasn’t like anything had to be reverse engineered. Maybe it just didn’t happen because the people at the top didn’t have the interest?

I used to be friends with a guy that worked inside Tandy and I remember some of his stories about what went on as far as projects and what got approved and what got canceled. I guess it’s like that inside any large company but sometimes it seemed like good projects got canned just because the manager didn’t like them. I know from other things I’ve read that the Model 4 wasn’t real popular inside Tandy at the end of its life — even though it was still selling well — so maybe they just didn’t want to do anything to prolong it. After all, MSDOS was the future, right? There was so much more money in making PC clones than in doing anything original! Sorry for the rant, but this article reminds me that computers used to be a lot more interesting back in the days when I was working with my Apples and TRS80s. Btw, great site, it really brings back alot of good memories. Thanks for that.

My cousin worked at Tandy and saw one of the demonstrations but it wasn’t games, it was Superscrips and business software. He said it worked great but knew they’d kill it before they finished it. Looks like he was right.