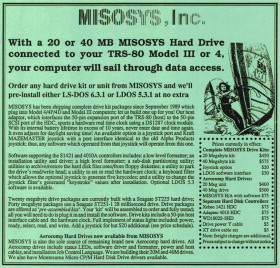 The MISOSYS Hard Drive Kit came with a 59-page manual and both Model III and Model 4 versions of the hard drive software. Some of the supplied programs1 included:

There were also patches to make LDOS and LS-DOS automatically use the real-time clock.

For a time in late 1991, MISOSYS offered bundled software already installed on the hard drive. These bundles included:

Perhaps the most interesting bundle was the $50.00 “Programmer’s Powerpack” which contained:

In 1990, the prices for the MISOSYS Hard Drive Kit remained the same, but the host interface cable and the clock option were added to the packages for no extra cost.

The final price reduction was in 1992, when the prices were reduced to $395.00 for the 20 MB version and $495.00 for the 40 MB version (although the real-time clock was no longer included and only available as an option).

The MISOSYS Hard Drive Kit was one of the last products MISOSYS sold. As far as I know, it was still available for sale until MISOSYS closed down on March 1, 1994.