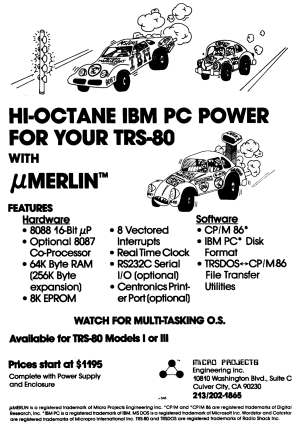 The MicroMerlin connected to the expansion bus of a computer and required no hardware modifications to the computer itself. It originally supported the Model I and Model III, but later also the Model 4 and LNW80. There were two main hardware requirements:

The MicroMerlin came with a 5 MHz 8088, 64K (later 128K) of RAM, one parallel port, and one RS-232 port (originally optional but standard later). It used the keyboard, screen, and floppy drives of a TRS-80 for input and output. For expansion, it had a socket for a 8087 math coprocessor, room for three expansion cards, and support for up to 768K of RAM.

Special versions of MS-DOS 2.11 and CP/M-86 were used to run ordinary MS-DOS and CP/M-86 programs, such as dBASE II, Multiplan, and WordStar. The MicroMerlin even supported many IBM PC BIOS functions, but had no support for direct access to the PC hardware.

The MicroMerlin was an intriguing device, and not all that expensive when compared to other options available at the time. As far as I know, it was never upgraded to support any later version of MS-DOS.

Micro Projects released an updated model called XCalibur. It had an internal expansion capability to add video cards and memory. That architecture allowed direct HW access to the standard IBM PC CGA port address, thereby magically allowing a TRS80 to run Lotus 123 and Microsoft Flight Simulator. It retailed for $995. And we did get an upgrade to MSDOS 2.1 as well as early versions of CP/M86 running in our labs at the time. Those were fun and exciting times. I still have a microMerlin and an XCalibur.