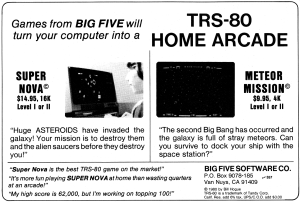 An advertisement from 80 Microcomputing

Meteor Mission was Bill Hogue’s first TRS-80 game. It is usually not included in listings of Big Five Software games, and some sources have denied that it was ever sold. But it was advertised in the August, September, and October 1980 issues of 80 Microcomputing. It seems to have been withdrawn at that point, and it never appeared in any future advertisements. I don’t know how many copies of Meteor Mission were ever sold (I’ve only ever seen one copy). Unlike the other Big Five Software games, there was only a Model I cassette version, but it would work on a 4K Level I computer.

The goal is to move a missile, represented by an up-arrow, through the meteors to dock at the space port at the top of the screen. It is a two-player game and the players compete with each other. The player who docks at the spaceport the greater number of times wins. Player 1 uses the UP and DOWN arrows to control the missile on the left. Player 2 uses the RIGHT arrow and CLEAR key to control the missile on the right (which makes sense if you look at a Model I keyboard). Unfortunately, the use of the up-arrow symbol for the missiles makes them somewhat difficult to distinguish it from the background. 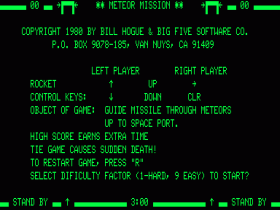 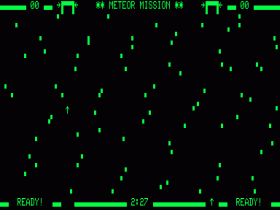 Notice the up arrows on the left and right

Meteor Mission doesn’t feature the impressive graphics of the later Big Five Software games, or use the trademark alien, the Flagship. It was never updated to support sound or a joystick and it was less expensive than the other games (only $9.95 as opposed to $14.95). But it is still a fun game, and one of the few TRS-80 games that can be played by two people at the same time.

I owned this game. For some reason, it was a LOT of fun to me, even without the exciting extra graphics. A buddy and I could play at the same time so it was great fun. If I recall, Big Five sent out a mail saying there was a new version I could get if I returned my tape. So I did and they sent me Meteor Mission 2. I was so mad and spent recent years looking for the original game that was so fun. Meteor Mission 2 was nothing like the first one game play wise. My suspicion was that the first game was too similar to a real arcade game that was out at the time where you would fly up and down to avoid stuff to try to dock at the top or bottom, so B5 decided to change the game to avoid legal hassles? Strange since all their games were clones of popular arcade games, including MM2

FYI, this is also advertised in the TRS-80 Applications Software Sourcebook (cat. #26-2114), Volumes II and III. Those are undated, but were apparently published in late 1980 and August 1981 (per Microcomputer News, March/April 1980 and October 1981 issues). Here’s the description:

SPACE STATION THE MOST TIMES BEFORE TIME RUNS OUT. RUNS ON LEV1 OR 2.

Another impressive feature that is unique to this game among Big Five offerings is that it only requires 4K rather than 16K RAM.