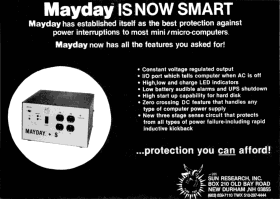 Mayday was a line of uninterruptible power supplies for the TRS-80 and other computers. It was sold by Sun Research (originally Sun Technology), a division of Phase-R Corporation.

Phase-R Corporation was located in New Durham, New Hampshire and experienced frequent problems with poor power quality and frequent outages. They originally developed the Mayday to protect the office TRS-80’s, describing it as “designed and developed using a complete TRS-80 system.” Sun Research introduced the first Mayday model in 1980.

Sun Research sold several different Mayday models. All versions used a 12-volt car battery (enclosed in a special waterproof case) as the battery backup. The number of power outlets provided varied with the model, but ranged from two to eight. The price also varied, but a Mayday +S with a 150 watt power supply (suitable for a Model I) cost $325.

Just like a modern uninterruptible power supply, the Mayday provided protection against both brownouts and blackouts. In the event of a power outage, the Mayday could switch to battery power in less than 5 milliseconds. This was more than enough time to prevent memory loss or disk errors. Later Mayday models could even notify the computer through an I/O port if the power went out.

The amount of time a Mayday could run a computer entirely on battery power varied depending on the Mayday model and type of computer. According to one estimate, the Mayday +S could power a Model I for up to 30 minutes during a power outage.