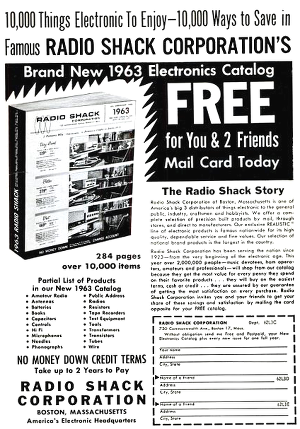 Advertisement for Radio Shack in 1962 issue of Popular Mechanics

This is hardly surprising, but sad nonetheless. Even though Radio Shack hasn’t sold its own computers since the early 1990’s, it was still a direct link back to the TRS-80. Radio Shack’s demise will leave only Apple as the last remaining company responsible for the “1977 trinity” of the Radio Shack TRS-80, Apple II, and the Commodore PET.

Curiously, this isn’t the first time Radio Shack has faced bankruptcy. Radio Shack began in 1921 when Theodore and Milton Deutschmann started a single store and mail-order business in Boston, Massachusetts. It sold amateur radio equipment but soon expanded into selling more types of electronics products. Radio Shack became known for its catalog and opened more stores, for a total of nine stores by the 1960’s. But bad management decisions led to Radio Shack facing a $4 million loss and probable bankruptcy by 1962.

In 1962, Charles Tandy, the head of Tandy Corporation, bought Radio Shack for $300,000 and relocated it to Fort Worth, Texas. In just a decade, Tandy turned an essentially bankrupt company with nine stores into the largest electronics chain in the country with thousands of stores. This remarkable turnaround ultimately resulted in the introduction of the TRS-80 in 1977.

Unfortunately, there is no Charles Tandy to turn the company around this time. Although I think current managers are making many of the right choices, events have just gone too far by now. Radio Shack is suffering from years of poor management decisions, some dating back as far as Charles Tandy’s death in 1978.

It’s interesting to speculate on how Radio Shack history might have been different had Charles Tandy not died unexpectedly so soon after the TRS-80 was introduced. Had he lived, I suspect he would have capitalized on the TRS-80’s early lead. Charles Tandy understood retail and marketing in a way that none of his successors at Tandy Corporation did. Perhaps that imaginary Radio Shack would be facing revenues of $182 billion today (as is Apple, Inc.), rather than facing bankruptcy instead.

This news really saddens me to the point of tears, I truly loved Radio Shack or Tandy as it was known here in the UK, it was a major part of my life growing up. It helped me develop a life long love of electronics, building projects and computers, I truly loved my TRS-80 computers, my CoCos and pocket computers and I have great memories of saving my pennies and getting my grandad to take me to my local store on a saturday to see what I could buy. Tandy exited the UK market a long time ago, but seeing the ‘home’ corporation meet this demise really tugs at my heart strings. I still hope someone who loves and appreciates their history buys the brand and brings new TRS-80 machines back, even kits or something. If Maplin can survive here in the UK until today, there is no reason why Radio Shack should fail – this is an age it -should- thrive in.

Frankly, the demise of Radio Shack doesn’t really surprise me now. In recent years they’d primarily become a mobile phone dealer, I visited a RS store in Boston in 2010, and there was almost nothing of the kits, components, modules, etc, and in fact first thing the salesman asked me was, would I like to buy an iPhone. I thought OK, and just walked out. Don’t really feel any sadness at all, that’s what they decided to become, so be it.

Maplin in the UK hasn’t really changed so much, electronics for the hobbyists is still their main thing.