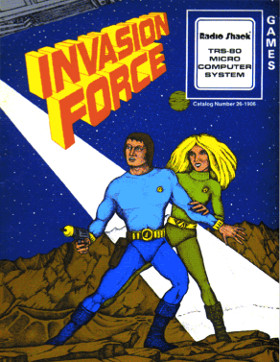 Flash Gordon inspired cover of the Invasion Force manual. Like most game art, this has absolutely nothing to do with the game.

Invasion Force (catalog number 26-1906) was one of the first action games Radio Shack published for the TRS-80 Model I. It was written by Robert Arnstein and introduced in 1979 on cassette1 for a price of $14.95. There never was a disk version of Invasion Force.

Take command of the USS Hephaestus and protect the galaxy against the hated and feared Jovians. The Command Control Display (TRS-80 screen) places all the ship’s resources at your fingertips. Navigate through space using your hyper or ion engines. Use your long-range and short-range scanners to find the Jovian villains. When you do, attack with one of your four weapon systems — but you had better keep your deflector shields up to protect yourself against counter-attack!

Radio Shack also sold a game for the Pocket Computer 2 named Invasion Force (catalog number 26-3705). The PC-2 Invasion Force was written by Peter Levy and developed under the title Sirius Sector (a name still mentioned in the manual) before Radio Shack changed it shortly before release. It had no connection to the Model I/III version.2

Invasion Force is a variation on a type of game, which was very popular at the time, known as a Star Trek game3. Star Trek games are text games played on an grid (usually 8 by 8), known as a quadrant. Each position on the grid, known as a sector, can contain the Enterprise, a Klingon ship, a Starbase, a star, or just empty space. The Enterprise can move among sectors or move to another quadrant.

The goal is to destroy all Klingon ships before time runs out. The Enterprise can attack with phasers and photon torpedoes, but phasers deplete available power and there are a limited number of torpedoes. Klingons in adjacent quadrants can be detected using long range sensors. Docking at a Starbase replenishes energy and the supply of photon torpedoes. 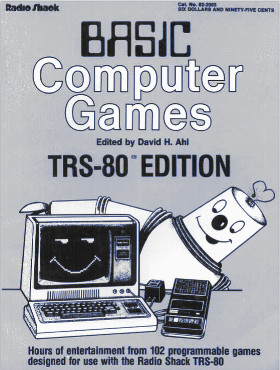 Until the advent of microcomputers, all Star Trek games were written for mainframe computers. The original Star Trek game was created in 1971 by Mike Mayfield4. He wrote it in BASIC on the SDS Sigma 7 at the University of California, Irvine. In 1972, he ported it to BASIC on the HP 2000C.

Another type of Star Trek game was TREK73, which was written in 1973 by William K. Char, Perry Lee, and Dan Gee. TREK73 is more of a battle simulation than Super Star Trek. A review in BYTE described Invasion Force as borrowing from both Super Star Trek and TREK73.

Invasion Force was a near clone of Trek-80, a game sold by Processor Technology Corporation for their Sol-20 computer. The Sol-20, introduced in 1976, was one of the first consumer microcomputers. Processor Technology sold the Sol-20 in both kit and fully assembled versions. They also sold Sol-20 software, such as Trek-80, 8080 Chess, and 8080 Focal.

Based on the NBC television series STARTREK, this 8K assembly language program uses the VDM graphics capability for real time war with the Klingons. No holds barred, they’re out to get you from each of the 100 quadrants. Trek-80 resides and runs in 8K of memory and required the PTC Sol or VDM-1.

The Trek-80 manual doesn’t list an author, but does describe the long range sensors on the Enterprise as “Arnstein Fingers.” Robert Arnstein wrote several Sol-20 programs for Processor Technology, including 8080 Chess and 8080 Focal, so I think it is reasonable to assume he also wrote Trek-80.

When Processor Technology shut down in 1979, they stopped selling all of their Sol-20 software, including Trek-80. 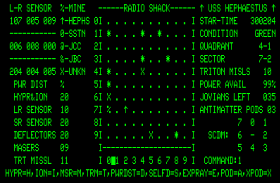 Although the name Star Trek and associated terminology was widely used in computer games, Paramount still owned the trademarks. This caused a problem when Radio Shack decided to release a TRS-80 version of Trek-80. Radio Shack didn’t want to pay to license the trademarks, so their solution was to rename the game to Invasion Force and change all the terminology to non-Star Trek terms. For example, the USS Enterprise was changed to the USS Hephaestus. Photon torpedoes became Triton missiles. Klingons became Jovians. A Stardate became a Star-time.

The entertaining manual for Invasion Force, written by Harvey Gerst, lays out the storyline of the game. It tells the story of Commander Neal as he commands the USS Hephaestus, destroying Jovian ships and dealing with his sarcastic (and borderline insubordinate) First Officer Flood. Here is the manual’s description of the USS Hephaestus:

Over the years, the Hephaestus acquired a dubious reputation, until it became the final haven for every misfit in the service. If there was a dirty job to be done, Neal would be picked for it. After all, what loss to the service would result from the destruction of an old decrepit starship, and a group of outcasts? True, the service had made a feeble gesture of support to the Hephaestus, when they authorized the user of Antimatter Pods against the larger Jovian Command Cruisers. They were the only known defense against the Jovian Command ships. Neal didn’t trust the Pods because of their unpredictability. But then, Neal had never fought a Jovian Command Cruiser before, either. No one in the service had … and lived to tell about it, anyway.

The manual describes a sample mission of the USS Hephaestus which is designed to familiarize the player with the game controls. It ends by offering the player command of the ship:s

Now YOU know almost everything that Commander Neal knows. Our planets are still threatened by the Jovians, and we’re desperate for new Starship Commanders. Are you willing to accept command of the Hephaestus? Yes, it’s still around. It’s yours, if you want it. It’s the only available ship we have.

I wrote the PC-2 “Invasion Force” game for Radio Shack while working for them in the early 1980’s. It was developed under the title “Sirius Sector” and renamed by Radio Shack before release. I wrote it from scratch and it’s not related to anything else; any resemblance is just happenstance.