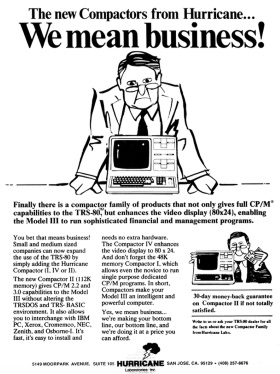 Microcomputer Technology, Inc. of Santa Ana, California, better known as MTI, acted as a distributor for Hurricane Labs. MTI sold their own line of modified Model III’s known as the Mod III Plus, some of which included the Compactor. For example, their “Mod III Plus CX 140” was CP/M compatible, with 64K of RAM, an 80 by 24 screen, a “cooling system”, two internal floppy drives, and DOSPLUS 3.3. The price for the Mod III Plus CX 140 started at $2,395.00. MTI also sold the Compactor separately as the “CP/M 64K” for $579.00. It isn’t clear which version of the Compactor the “CP/M 64K” was, but it may have been the Compactor II.

Hurricane Labs was out of business by late 1983, and MTI had stopped selling the Compactor models by that time.

After Hurricane Labs, Ron Jones founded Colossal Graphics, an innovator in large format printing, and co-founded SongPro. Among other honors, he received the Innovation Award at the 50 Most Important African Americans in Technology Awards in 2000. He died in 2004 at the age of 48.

Great research as always. Appreciate the “what they did afterwards” info also.

Would enjoy hearing more about products' tech implementations whenever know, eg if bank switching was used and how etc.