The Freedom Option included T8/OS, a CP/M compatible operating system written by FEC. Much like Cromemco’s CDOS, T8/OS could run most CP/M programs. A few other manufacturers, most notably LNW Computers with their LNW80 Model 2, also supported T8/OS for their systems.

Unlike CP/M, which was written for the Intel 8080, T8/OS was written specifically for the Zilog Z80 used in the Model I and Model III. It used the extra Z80 instructions not present in the 8080.

FEC introduced the Freedom 3 in late 1981. It was very similar to the Freedom Option, but was designed for the Model III. FEC sold three versions of the Freedom 3: 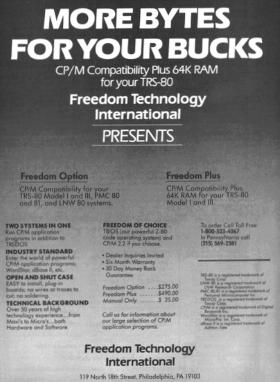 Freedom Technology advertisement from the July 1982 issue of 80-U.S. Journal

Not long after it was introduced, FEC combined the Freedom 3 with the Freedom Option. This created two products that would work on the TRS-80 Model I , TRS-80 Model III, Personal Micro Computers PMC-80, and LNW Research LNW80:

Later Freedom Technology advertisements mentioned a new product: the “Big Screen.” It appears to have been much like the Holmes VID-80, a way to expand the TRS-80 display to 80 by 24.

The Freedom Technology advertisements disappeared from TRS-80 magazines by 1983.