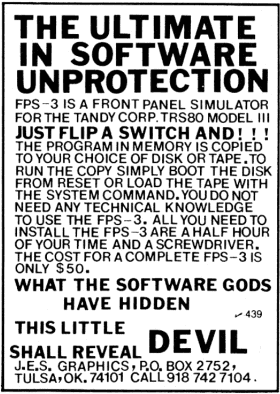 The FPS-3 (which stood for Front Panel Simulator) was a small circuit board (3" by 2 1/2") that installed inside the Model III. Installation required no soldering and consisted of six steps:

The FPS-3 was controlled by two toggle switches attached to the circuit board with long wires. Since those switches had to be toggled by the user, they needed to be placed outside the Model III case. Users could drill two small holes in the Model III case for the wires or they could run them through the space for the (probably unused) RS-232 port.

After the FPS-3 monitor had been copied into FPS-3 RAM, a protected TRS-80 program could be copied using these steps:

A disk or tape created using this technique could be loaded by any TRS-80 system, even one that didn’t have the FPS-3 installed.

Dumping the memory to disk took around 30 seconds. The disk created wouldn’t have a standard TRSDOS directory, but it wasn’t copy protected. Any disk copy program, such as Super Utility, could be used to make a copy.